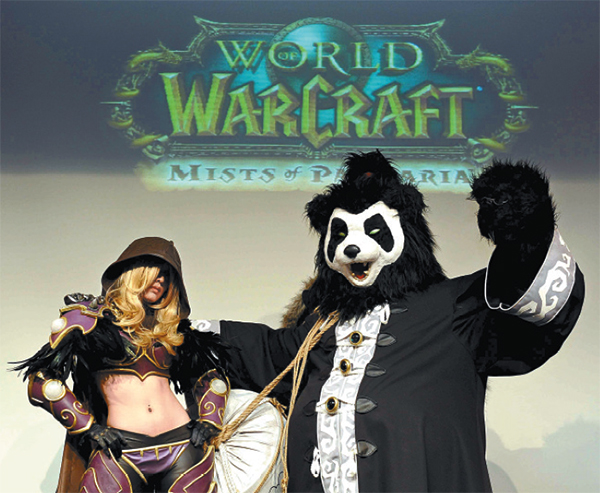 Models dressed as the characters of World of Warcraft pose at a Blizzard Korea event held on Sept. 25 in central Seoul. [YONHAP]


The U.S. game developer Blizzard and Korean game company NCsoft are once again gearing up for a second round of fierce competition to secure the top spot in the second half of the year with new expansions and upgrades.

On Sept. 25, Blizzard announced that it was releasing the expansion pack of its hit game World of Warcraft (WoW). With a kung fu-fighting panda in a landscape that looks very much like China, Mists of Pandaria is the fourth version of WoW. 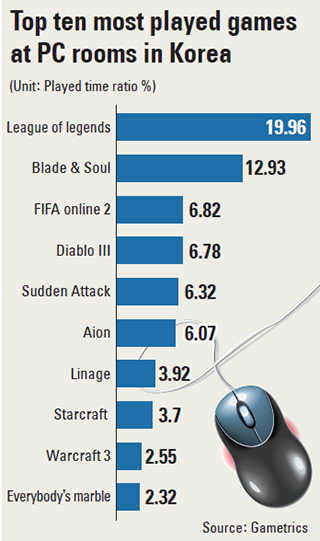 Three days later NCsoft celebrated the 100th day since the release of its most ambitious game yet, Blade & Soul, by announcing an upgrade, including additional battle stages and costumes for customizing the characters.

Blizzard was the first to make a move this year as it released Diablo III, which gamers around the world had been anticipating, in May. Diablo III was a huge hit when it was released, selling more than 10 million units. Yet it was mired in controversy, including problems with server connectivity.

NCsoft in June released Blade & Soul which took the company more than five years to make and a cost more than 50 billion won ($44 million).

Blizzard’s market position was quickly threatened when Blade & Soul was released. The two companies have been vying for the top spot of the game market, which currently is held by League of Legends from Riot Games.

The competition between the two dates back to 1998 when the online game market in Korea started to boom at an alarming rate thanks to the opening of PC rooms in nearly every neighborhood. Blizzard at the time released Starcraft while NCsoft captured gamers with its online game Lineage.

For Blizzard, the Korean market has been important especially as it was the one place that helped solidify the success of online games such as Starcraft in the past. One of Blizzard’s most solid titles, Starcraft ranks eighth in PC games and has held steady over the years.

According to Gametrics, a company specializing in PC games, League of Legends currently holds the top position as it accounts for 19.96 percent of game hours played at PC rooms on the first week of this month.

Blade & Soul took the second place at 12.93 percent. Diablo III’s rank went up a notch from a week earlier to fourth most played game with 6.78 percent.

For Blizzard, the success of the newly extended WoW is essential.

WoW, like Starcraft and Diablo, is one of Blizzard’s major hit games. First released in November 2004, the fantasy game of wizards, elves, dwarves and trolls quickly dominated the international market.

It is also considered by many game experts as setting a new standard of Mmorpg (Massively multiplayer online role-playing game).

Unlike previous Mmorpgs, where players can only level up through continuous play, WoW offered a quest system. The players could easily reach a new level once they completed the given task. Today more than nine million people across the globe play WoW.

However, WoW’s popularity has been dwindling in recent years as subscribers worldwide have been declining. Subscribers in 2008 exceeded 11 million. Even in the local market WoW has been pushed back to rank below the top 10 popular games played at PC rooms. Most online games are played in these rooms where players can sit behind the monitor and spend hours in their fantasy world undisturbed.

Blizzard recently has been struggling as the company had to sack 600 employees worldwide earlier this year.

Blizzard Korea was confident that the new extension pack for WoW Pandaria will turn the situation around.

“WoW is a game that set the standard for Mmorpg when it was released in the world,” said Baek Young-jae, Blizzard Korea CEO.

“I am confident that Pandaria will set the new standard on Mmorpg games.”

He added that the expansion pack in particular is targeted to the Asian market which is a new angle for the company.

It is the same for NCsoft, which recently has been undergoing major changes including its first ever layoff since the company was founded in 1997. The company’s majority shareholder also changed when founder and CEO of the company Kim Taek-jin sold 14.7 percent of the 24.69 percent stake he had in the company to another rival company Nexon.

Although NCsoft has enjoyed hits with games like Lineage and Aion, it has been losing gamers due to a lack of fresh games that would pique the interest of players.

However, things are looking up for NCsoft thanks to Blade & Soul. The share value of the company rose 1.2 percent on the expectation that the company’s performance in the third quarter will be favorable.

“NCsoft’s shares recently have dropped almost 30 percent compared to in April before Blade & Soul was released as there has been growing concern that the game market has shifted from online to mobile,” said Jung Woo-chul, a Mirae Asset Securities analyst.

“However, there is growing optimism that in the third quarter NCsoft’s operating profit will likely increase 89 percent compared to a year ago to 63.9 billion won and that it would further expand to 125.6 billion won in the fourth quarter,” the analyst added.

The prospect for Blizzard is also looking favorable as it has sold more than 2.7 million units of the extension pack in a week since it was released.