Kia Motors seems to be suffering headache from the K9, a full-size luxury sedan, as it continues sell poorly in the domestic auto market.

On May 2, Kia, the nation’s second largest automaker, revealed the K9 to compete with the likes of BMW and Mercedes-Benz. 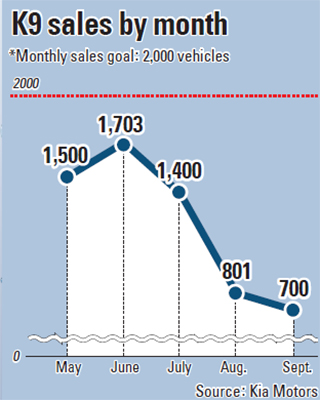 The flagship sedan was the company’s first full-size luxury sedan since the Enterprise in 2002 and the first rear-wheel-drive model in more than a decade.

Kia announced a sales target of 2,000 per month, a target that has yet to be hit. In September, only 700 K9s were sold in Korea.

Kia attributed the sluggish sales to the slow summer season and a labor strike in July and August, but others think sluggish sales were to be expected from the beginning.

“I think Kia’s marketing strategy went wrong from the start,” said Kim Pil-soo, a professor of automotive engineering at Daelim University College. “Since K9 was only focusing on catching vehicles from BMW or Benz, it didn’t really have its own identity.

“In addition, Kia didn’t build up like brand image, like BMW or Benz, but the company set too expensive a price tag on the K9.”

K9 sells for 52.9 million won ($47,610) to 86.4 million, but at that price range Korean drivers are apparently more eager to buy imported cars as they have more solid brand power, according to Kim.

Kia has emphasized new technologies in the K9 and claimed it comparable to the BMW 7 Series or Benz S-Class.

However, Kim said that offering so many high-tech features may have backfired.

“The vehicle has too many features as options and the car price changes too widely depending on what kind of features are in the vehicle,” he said. “But for consumers, that is just too much to think about.”

What’s more concerning to Kia is that K9 sales look as though they might be going nowhere fast in the near future, as Hyundai Motor, the nation’s No. 1 automaker and sister company of Kia, has released a new its full-size Genesis and has plans for a new Equus.

“K9 is a model that is placed between Equus and Genesis, but if two models are coming to market, that means cannibalization and it will further affect K9 sales,” Kim said.