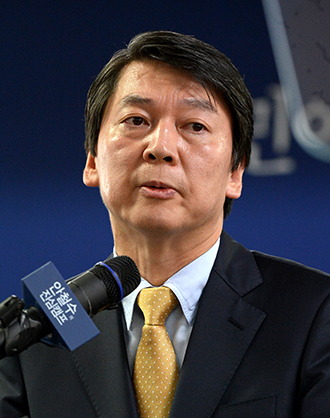 Independent presidential candidate Ahn Cheol-soo declared the first of his policy pledges yesterday on issues including the balance of power, closer cooperation with North Korea and reforms for prosecutors.

The liberal presidential hopeful and founder of anti-virus software company AhnLab spoke on seven areas including the economy, welfare and education and emphasized increasing the authority of the National Assembly at a press conference held at his election campaign headquarters in Gongpyeong-dong in Jongno District, central Seoul.

“Only I can accomplish the two tasks of administration change and political reform,” said Ahn, adding that he would “change through reformation policies the political system that does not reflect public opinion.”

In a move to limit executive authority and push for a better balance of power, Ahn pledged that presidential pardons would be granted after approval by the National Assembly.

He also stated that punishment for corruption among government officials should be augmented and said that corruption cases of civil servants warrant a separate investigation agency for the prosecution “independent from the president.”

Ahn said that he would cut the number of presidential appointees in the Blue House by 90 percent should he be elected.

“The people are at the very top, followed by the National Assembly; at the very bottom is the president and the government,” said the software mogul-turned-politician, adding that “political reform is the starting point of solving all problems.”

Differing from incumbent President Lee Myung-bak’s hard-line policy toward the North, Ahn also promised closer cooperation and dialogue with North Korea, though he will continue to urge the North’s nuclear disarmament if he is elected. He said he would seek the National Assembly’s approval for any major inter-Korea agreements.

“The relationship between North and South Korea is difficult homework that we have to solve but simultaneously may be a boon for us as well.”

Ahn said if the two Koreas reunite, it may solve various societal issues, boosting the dwindling labor force and promoting Korean prosperity and “peace and security in Northeast Asia.”

Regarding economic reform, he stated that there needs to be an increase in youths, seniors and women in the labor market and pledged to expand small- and medium-sized businesses.

Jin Sung-joon, spokesman for the campaign of the Democratic United Party’s Moon Jae-in, said yesterday that Moon’s base agrees with the major areas in Ahn’s pledges, but said they were “theoretical” and “abstract.”