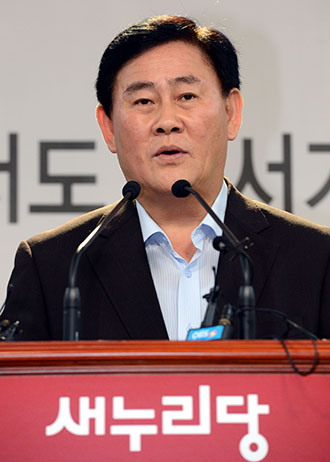 With the presidential election just over 70 days away, the chief of staff of Park Geun-hye’s presidential campaign announced his voluntarily resignation yesterday.

Amid internal strife fueled by Park’s dwindling popularity in recent opinion polls and inconsistent election strategies, Representative Choi Kyung-hwan, 57, a three-term lawmaker who headed Park’s primary campaign, said he would resign “for the sake of the Saenuri Party’s unity and election victory.”

“I apologize for not being able to properly assist candidate Park and worrying everyone, and bearing all responsibility, I will leave,” Park’s top aide said yesterday in a press conference held at the ruling party’s headquarters in Yeouido, western Seoul.

“I earnestly hope that the discord and conflict within the party can be resolved with my resignation.” 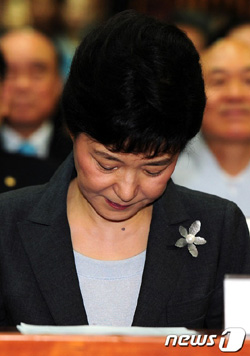 He added that if there have been any errors in the campaign strategy, he would shoulder the blame, and said that the resignation of election aides needs to stop with him.

Pressure for other key Park aides to resign built following criticism that only pro-Park lawmakers were appointed election aides to her presidential campaign.

Park’s apology last month regarding her father and former President Park Chung Hee’s dictatorial rule, admitting that his regime had violated the Constitution, also stirred tensions within the ruling party.

Kwon Young-se, secretary general of the party and a Park supporter, will likely become a more central figure in the election campaign.

The Saenuri Party’s reformist members have been calling for key figures in the pro-Park faction to step back from the front line of the election and last week called for a reshuffle in the organization of the campaign.

Park yesterday said that Choi “decided by himself” to resign and that she will “respect his decision.”

“Constantly creating artificial divisions between pro-Lee [Myung-bak] and pro-Park factions raises confusion for both the people and the party and should not be made,” the candidate said.