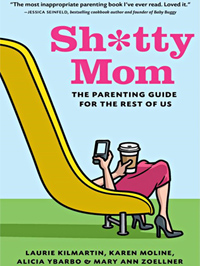 
One mom lured her daughter to bed - at age 8 - with a trail of chocolate chips up her townhouse stairs. Another found herself on the floor of a plane screaming “Save the Jelly Bellys!’’ They spilled as she fed them to her preschooler to fend off in-flight earache meltdowns.

A third mom who avoids sweets and high fructose corn syrup like they were poison has her toddler begging for his “medicine candy’’ when it’s time to take the dreaded Tylenol.

Don’t go diving for your dog-eared parenting guides or Googling Dr. Sears on the above, but if you’re looking for a little validation of your crappiest mom moments as not such a huge deal after all, hunt down “Sh-tty Mom,’’ the unofficial companion to last year’s best-seller “Go the (Bleep) to Sleep.’’

“Even the helicopter moms and tiger moms have their shitty mom moments. Maybe they missed their daughter’s fifth ballet practice that week or were five minutes late to her piano lesson,’’ said co-writer Mary Ann Zoellner. “The whole idea of the book is to just give yourself a break.’’

Zoellner and Alicia Ybarbo, both segment producers for the “Today’’ show, cooked up the idea with Karen Moline one night over margaritas about three years ago. One among them was avoiding her kids’ bedtime madness back home.

The three were paired by an agent with Laurie Kilmartin, a joke master for “Conan’’ and single mom to a 5-year-old in Burbank, California.

“The target audience is women who are tired of books coming out that tell you you’re kind of doing everything wrong and if you only did this, this and this you would be doing a better job and your kids would turn out better,’’ Kilmartin said. “I think tiger mom put everyone over the deep end, and so it was sort of a pushback.’’

Written in guide format, the book includes easily consumed chapters and tips like these:

1) Send your daughter sick to day care. Not bubonic plague sick. Just sniffle sick. And maybe a little fever, something you wouldn’t know about because you avoid the thermometer to preserve deniability.

2) Pretend you don’t know your son in the playground after a sand-throwing incident, leaving the discipline to the victim’s mom because she seems really good at it.

3) Play dead while your daughter scream-whispers “Are you awake?’’ at 5 a.m., at least until you’ve trained her to head for daddy’s side.

One chapter is titled “Stop Looking for a Great Babysitter and Settle for One Who Shows Up On Time.’’ Another, “How to Deal with Moms Who Exercise,’’ suggests - if you’re in survival mode - limiting friendships to other “bare-minimum moms,’’ avoiding those who throw their abs in your face.

There’s “This Tradition Must Die: Handwritten Thank-you Notes’’ and “Unspeakable Evil: Private Birthday Party - with a Bouncy Castle - at a Public Park.’’ Has your son stormed the castle uninvited? “Keep a low profile until your kid gets busted. It’s best not to outwardly condone grifty behavior.’’

The book out in mid-September just hit The New York Times best-seller list at 12th in its category and the five co-writers are fielding supportive e-mail, including one from Alicia Hunter in Palm Beach Gardens, Florida.

She has a 9-year-old and a 6-year-old and immediately recognized herself in print. Among her favorite book bits:

“The chapter on hating the zoo/playing with my kids in general when they ask me to use my imagination,’’ Hunter said in an interview, “Let’s play school! Let’s play house! Let’s play grocery store! Unless it’s a board game WE actually like, please do not ask us to play a game that involves using our imagination. We used that up by the time we were 13.’’

Count Hunter, a beauty and weight-loss coach, among moms who never felt a kinship with those who read each piece of paper that comes home from school, have dry erase boards listing deadlines for homework and fulfill the teacher’s wish list of supplies five minutes after said supplies are requested.

The two daughters of Jelly Belly mom Robyn Roth-Moise in Manhattan are grown now, but she bought several copies of the book for friends.

“I can remember having to go to the store and my daughter had chicken pox and there was no one to watch her,’’ she said. “So I did what every mom does, wrapped her up and prayed no one noticed her. Did I feel guilty? Yes. Did I have another option? No.’’

Corporate trainer Liz Wolfe in New York has an 11-year-old boy and an 8-year-old girl, the latter being the follower of chocolate chips - not, for the record, directly to bed but to the bathroom sink first to brush her teeth.