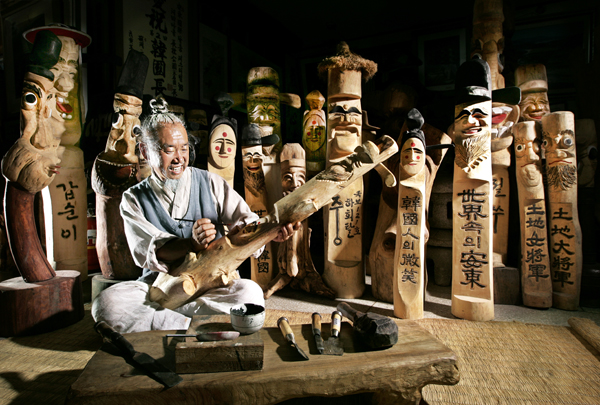 Kim Jong-heung, a master craftsman, carves a jangseung piece at Mokseokwon, his workplace located at the entrance of Hahoe Village in Andong, North Gyeongsang. Jangseung, Korea’s traditional wooden totem pole, are erected at each village’s entrance as a signpost as well as to drive away evil spirits. Kim makes his jangseung look more amusing so that viewers aren’t scared away by them. By Park Sang-moon


At the entrance to the Hahoe Village in Andong, North Gyeongsang, is Mokseokwon, a garden of wood and stones. The garden is the workplace of Kim Jong-heung, a master craftsman with traditional woodcraft skills which are designated as Important Intangible Cultural Property No. 108.

Here he makes jangseung, Korea’s traditional wooden totem poles. In the past, jangseung were set up at each village’s entrance as a signpost as well as to drive away evil spirits. Visitors to Mokseokwon can see some 200 pieces of jangseung, all different. Some have big, open eyes, others are half-closed. Some have gaping mouths, others have a shy smile. Traditional jangseung have somewhat scary faces and angry expressions. However, Kim has been making jangseung that look more amused so that viewers feel more at ease. 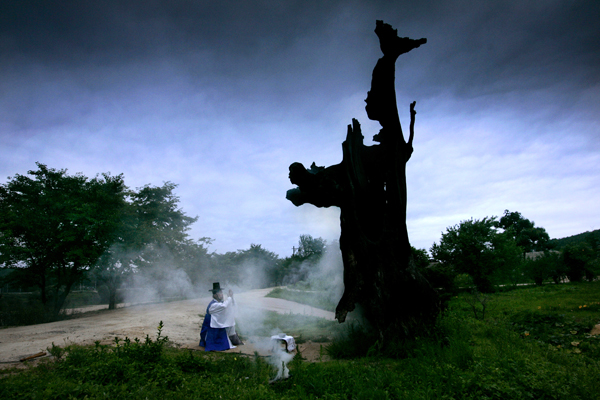 Kim Jong-heung prays to a holy tree in Hahoe Village and burns mugwort. It is a procedure he goes through before making a new jangseung to drive out evil spirits and dark forces. By Park Sang-moon


The model for the faces of these jangseung is hahoetal, the traditional masks of Hahoe Village, which date back to the mid-Goryeo period (918-1392). Kim says the masks represent Koreans’ real faces. The jangseung meld both traditional and modern elements and reflect various emotions of humans ranging from joy to sadness.

Kim has so far made around 4,000 pieces of jangseung. They now stand in Seoul Sangam-dong World Cup Stadium Park, Jungsanni Sculpture Park of Mount Jiri and other places. The statues are also in the United States, Canada, Russia, Australia, New Zealand and Japan.

Left: Kim Jong-heung toasts with Britain’s Queen Elizabeth II when she visited Hahoe Village in 1994. The village held a party to celebrate the queen’s 73rd birthday, which fell on April 21, in Korean traditional style. Right: Former U.S. President George W. Bush smiles after receiving two of Kim’s jangseung as gifts when he visited the village. Provided by Kim Jong-heung


Kim was designated as a representative craftsman of Hahoe Village by the Cultural Heritage Administration of Korea last December. He is also known for having toasted with Britain’s Queen Elizabeth II when she visited Hahoe Village in 1994. At that time, the village held a party to celebrate the queen’s 73rd birthday, which fell on April 21, in Korean traditional style. Kim, who coincidentally had the same birthday, toasted with the queen as a representative of the village. Kim also met with former U.S. President George W. Bush and gave two of his jangseung pieces to him as a gift when he visited the village in 2009.

Kim doesn’t always stay at Hahoe Village. He frequently does perform jangseung carvings not only in various parts of the nation but also in other countries, including the United States, Russia, Germany and the United Kingdom. He is ready to visit anywhere if the people there want to see his performance.

* This is the first installment of a monthly photographic series from the Korea JoongAng Daily’s staff photographer Park Sang-moon.