Women in finance cut off from executive posts

Women in finance cut off from executive posts 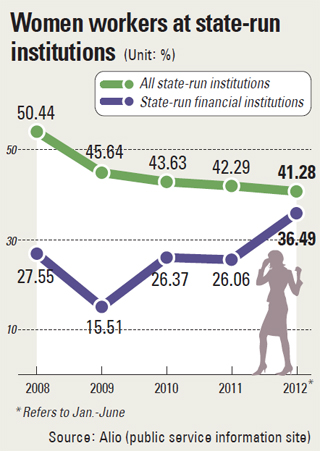 Women account for just 1.64 percent of executive-level officials at 10 state-run financial institutions, suggesting there is still a glass ceiling for the fairer sex to break through, according to data supplied by Alio (www.alio.go.kr), a public service information site, yesterday.


Of 61 executives at 10 state-run financial institutions, Noh Jung-ran at the Korea Asset Management Corporation (Kamco) is the only female.

“Technically, women can get promoted to executive positions depending on merit, but in reality there are still certain barriers,” said Yang In-sook, a research fellow at the Korean Women’s Development Institute.

“To address this gender imbalance, and to strengthen women’s access to better jobs, [the government] needs to adopt measures such as imposing gender quotas for executive positions.” 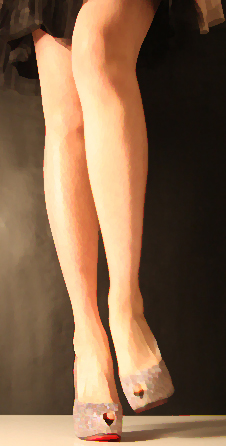 No such gender quotas currently exist for women on boards or in senior management positions in the public sector, Yang said. Women accounted for 25.19 percent of newly hired employees at state-run financial institutions from 2008 to the first half of 2012, much lower than the comparable proportion for public institutions as a whole over the period, which stood at 44.65 percent, the data showed. Korea Securities Computing Corporation and Kamco were the least inclined to hire women, as female workers made up 15 percent and 18.39 percent of their respective work forces over the cited period.

Korea Enterprise Data and Korea Housing Finance proved the most female friendly as over one-third of their positions were filled by women, who made up 36.4 percent and 34.3 percent.

The situation is getting worse for women in the public financial sector as companies have been letting more of them go and increasingly filling new openings with men in the wake of the 2008 credit crunch, Yang added.

“Women are bearing the brunt of the economic downturn because companies favor male workers,” Yang said.