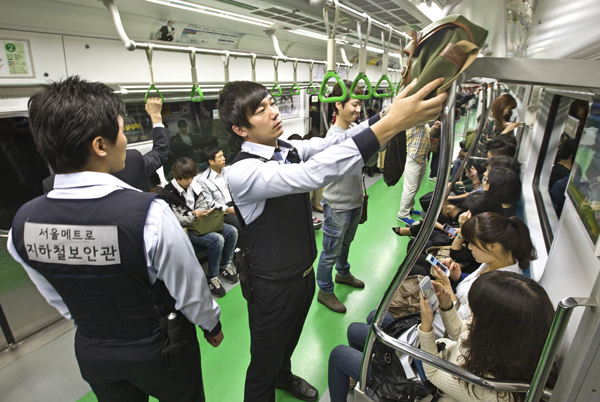 Seoul subway sheriff Yun Byeong-jun, right, patrols cars of line No. 2. The subway sheriff program was first introduced about one year ago as part of efforts to beef up Seoul’s subway safety after a string of violent crimes underground.


Park Sang-hee, a 36-year-old working mother, has been riding the Seoul subway since she was a high school freshman. “Before we had the bus lane, the subway was the only available public transportation because taking a bus meant that I was sure to miss my classes,” Park says.

Commuting from Dobong District, northern Seoul, to Jongno, central Seoul, Park used to frequent the city’s impressive subway system. But these days, she’s had a change of heart. Park says she now commutes by bus, which takes more time, due to safety concerns underground.

“Street vendors and religious fanatics who shout at you to believe in Jesus were the biggest nuisance on subways in the past, but I’m running across more lunatics and angry people who are ready to vent their anger for minor reasons,” Park says.

The last straw came in August. On a train heading to Seoul from Uijeongbu Station on the Gyeongwon Line, a man surnamed Yoo began brandishing a box cutter, wounding eight people. The suspect started slashing when he was scolded by a teenager for spitting at him. Yoo, who was unemployed, was on his way to find work in Seoul.

“The accident made me think about subway safety once again,” Park says. “Whether it’s at a platform or on a subway car, it is a sealed and packed space and there is simply no one to ask for help in an emergency situation.”

The Uijeongbu incident is one of a string of crimes on the subway that has dominated headlines. Random violence, theft and sexual assaults are the most commonly reported incidents.

According to the National Police Agency, 1,847 crimes occurred on subways in 2006, a figure that shot up to 2,343 last year. But the number of police stationed at subway platforms has decreased from 227 in 2006 to 103 as of this year.

The Seoul subway system is used six million times a day, and the 103 police allocated for the 339 subway stops means there is one police officer per 58,252 passengers underground.

Outside of the subway, the ratio is one police officer to 500 citizens.

The safety of the Seoul subway system is known to be more extensive than those of other major metropolitan areas in Korea such as Busan, Gwangju and Daejeon. For example, only one police officer is in charge of 22 stations in Daejeon, which is the fifth largest metropolis in the country.

In the northern parts of Gyeonggi, which covers areas like Yangju and Yangpyeong, no police officers are allocated.

The unmanned subway system that was introduced in 2008 is another factor fueling anxiety among regular subway passengers. It is hard to come across officials at stations.

“The uniform is quite meaningful,” says Lee Yung-hyeock, a professor of criminal psychology at Korean National Police University.

“People who intend to commit crimes might think they will be caught and punished if there are people who are in uniforms. We call it a deterrence effect and it surely prevents crimes.

For this reason, Park and many other subway passengers wonder whom they should ask for help when crimes occur next time. 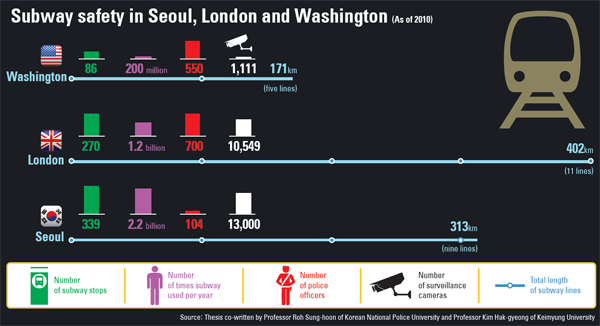 Kim Tae-eun, another company worker, is one of the subway passengers concerned about safety. About three years ago, she was standing at the platform of Guro Digital Complex Station after working overtime.

“I was listening to music, so I couldn’t sense that somebody was approaching me,” says Kim, who works at a foreign cosmetics company. “It was around the time when screen doors were partially installed. Unfortunately, there were no screen doors at my station.

“I was standing close to the subway track and somebody suddenly pushed me. Fortunately, I didn’t fall onto the tracks but I couldn’t ask for help because the subway platform was almost empty and I didn’t want to provoke him. I just left the scene.”

When asked about the reason behind the falling number of police officers at subways, the Seoul Metropolitan Police Agency said, “It’s not downsizing, but we have a certain number of people for each year. It’s 103 this year,” according to Park Jun-gyeong at the agency.

An answer from the National Police Agency itself wasn’t clear, either.

“We don’t know how many people will be allocated [to the subway] for next year because we have more than 110 different departments at the agency,” says an official working at the agency’s public relations team.

Seoul’s subway system is something the city takes pride in. It is one of the largest in the world and is relatively clean and technologically advanced compared to other major cities. But its safety measures are lagging behind other systems.

“The London Underground is used between 3.5 and four million times every day and there are about 700 police officers,” says Boyd Lance, an official at the transport policing department at Transport London, the government body responsible for the subway system. 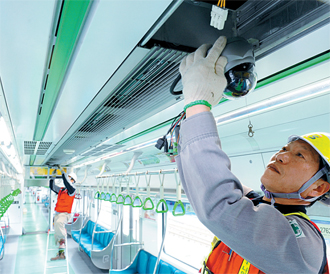 Despite an increase in crime, the number of police officers stationed the subway is falling. The Seoul Metropolitan Government installed surveillance cameras on a select number of subway cars one year ago as part of efforts to curb the number of violent incidents. [NEWSIS]

The total length of Seoul’s and London’s subways are similar, at 313 kilometers (194 miles) and 402 kilometers, respectively. Yet the difference in police officers is almost 700 percent.

A thesis co-written by Professor Roh Sung-hoon of Korean National Police University and Professor Kim Hak-gyeong of Keimyung University reveals the vulnerability of Seoul’s subway system. The thesis compares the safety measures of the Seoul, Washington and London subways.

As of 2010, the Washington Metro stretches 171 kilometers and has 550 police officers stationed. It may be lagging far behind in terms of cleanliness, technology and efficiency, but it has placed an emphasis on national security.

In order to address the lack of security in the Seoul system, the Seoul Metropolitan Government launched a “subway sheriff system” one year ago.

“A woman was dragged into a toilet at Sadang Station by a man in June of last year and she was molested and assaulted by him,” says Kang In-seok, an official who promotes Seoul Metro, which operates four lines from line No. 1 to No. 4.

“The accident triggered the launch of the subway sheriff system. It’s been a year since the introduction of subway sheriffs and we believe they partially contribute to prevent crimes as they patrol wearing uniforms,” says Kang.

“But there is a limit because they can’t exercise jurisdiction.”

A “sheriff team” consists of two patrol officers on crowded subway stations and platforms. Although they can’t replace the police, their main duty is preventing sexual crimes by wearing ordinary clothes during heavy commuting hours. When rush hour is over, they change into uniforms and patrol. Beggars, illegal salespeople, drunks and molesters are people they have to deal with the most.

Subway sheriff Yun Byeong-jun is in charge of the Hapjeong-Sindorim route, the most crowded area on subway line No. 2. When the Korea JoongAng Daily was accompanying him, Yun was on his night shift. Because of his small salary, he needs a second job, but the martial-arts expert takes pride in what he does. With the lack of fellow subway sheriffs, however, his task is a difficult one. “As you know, there are many people using the subway, but there are so few of us it’s hard to get in control of the situation when trouble occurs,” said Yun as he was patrolling every nook and cranny of Sindorim Station.

According to three subway operators in charge of subway lines from No. 1 to No. 9, about 170 subway sheriffs are on duty.

“We proposed it to the Ministry of Justice last year and this year,” says Roh Chun-yeol of the city government.

“Ko Hee-sun, a member of the National Assembly, filed a bill. A couple of crimes happened in the subways over the past months. We are expecting to see a favorable result this time.”

But are subways, not buses, more often the setting for crimes?

“There are three factors that cause crimes: motivated offenders, an absence of capable guardians and suitable targets,” says Lee.

“Buses and subways are both public transportation means, but bus stations are open and potential targets are scattered there. Subways are closed, sealed and suitable targets are flocked together. Even if they run away, there are many other targets. It is indeed a perfect place for motivated offenders.”