As others suffer, Hysco bucks trend

As others suffer, Hysco bucks trend 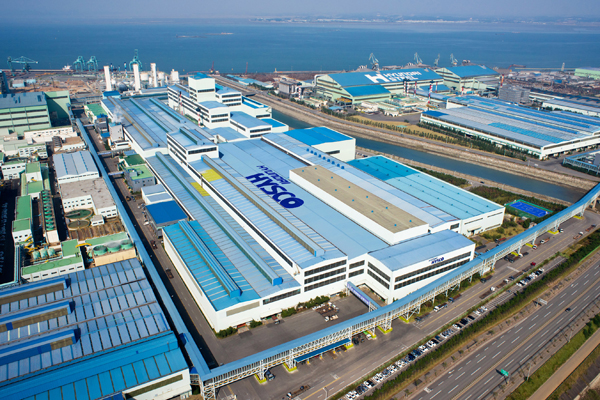 While Posco and Hyundai Steel, the country’s two major steel manufacturers, saw their respective earnings drop by half in the first six months of the year as the global steel market entered a deeper recession, Hyundai Hysco bucked the market trend to post a surprise operating profit.

The Hyundai Motor Group subsidiary that makes cold-rolled steel plates for automobiles - from hot-rolled steel supplied by Hyundai Steel - is the only domestic steel producer that saw its operating profit surge by roughly 10 billion won ($8.99 million) over the period. It jumped from 229 billion won in 2011 to 238 billion won, according to a half-year financial report provided by the Financial Supervisory Service.

Hyundai Hysco is worth about 3.5 trillion won, making it roughly half the size of Hyundai Steel, or just one-tenth as large as Posco, which is valued at 33 trillion won.

It runs a cold-rolled plant with annual capacity of 4.5 million tons in Dangjin, South Chungcheong, and is building a second plant to raise production to 6 million tons by May.

The company’s upbeat profit is backed by robust sales of automobiles made by its parent company. Unlike the depressed shipbuilding and construction industries, the local auto sector has been less affected by the economic slowdown triggered by the global financial crisis.

Hyundai Motor and Kia Motors achieved the highest quarterly sales of 21.9 trillion won and 12.5 trillion won, respectively, in the second quarter. Hyundai Hysco earned 4.3 trillion won, with 645 billion won of this coming from transactions with its parent company. This means Hyundai Motor’s contribution to its revenue was up 28 percent on-year.

Moreover, Hyundai Motor’s brisk overseas sales are expected to help Hyundai Hysco reap higher profits. The automaker is set to operate two new plants in Brazil in November and started running its third factory in China in August. Hyundai Hysco is preparing to meet demand at the new plants by ramping up production. It also started to run its own production site in Tianjin, China, last week. It predicts that about 270,000 tons of cold-rolled plates will be needed by the parent company’s new plant in the northern Chinese city. It is now operating nine factories outside the country.

Another factory is under construction in Turkey, slated for completion next June. The steel supplier is building plants in countries where the parent company is selling cars, contributing to both local production of the automaker and the group’s profitability.

“Because overseas prices of steel plates for automobiles are higher than domestic prices, Hyundai Hysco will rake in higher profits as its overseas supplies increase,” said Choi Moon-seon, an analyst at Korea Investment & Securities.

“Hyundai Hysco maintains stability and growth potential despite the depressed steel market,” said Park Hyun-wook, an analyst at HMC Investment & Securities. According to Park, Hyundai Hysco is expected to perform better next year as Hyundai Motor’s overseas production is forecast to reach 4 million units next year, up from 3.1 million as of last year.

An oversupply problem in the Asian steel industry, sparked by increases in production of cheaper steel products from China, served as a profit booster for Hyundai Hysco.

Hot-rolled plates serve as a common material for various steel products. Posco, Hyundai Steel and Dongbu Steel produce a combined 38 million tons of it a year, exceeding the country’s total demand of 33 million tons. At the same time, imports of cheaper Chinese hot-rolled products are on the rise. Because China is also seeing steel inventories pile up, it intends to sell more abroad to ease a domestic supply glut, which is causing prices in Asia to decline.

Hyundai Hysco could buy the material at lower prices to take advantage of the problem. The company said it paid 880,000 won per ton on average this year, compared to 900,000 won in 2011.

The company’s share price is also gaining momentum, with analysts raising their expectations from 48,000 won to 58,000 won. Last month, its CEO doled out 37,550 shares to 1,500 employees as an incentive in anticipation of a strong-performing fourth quarter. They were worth a total of 1.8 billion won.

According to an insider at Hyundai Hysco, this was the first time its employees have been gifted shares in the company. “Staff will appreciate this as the share price is likely to keep going up,” Park said.

In June, rumors swirled that Hyundai Hysco and Hyundai Steel could be merged into one steel manufacturer. Both have described the rumors as groundless.