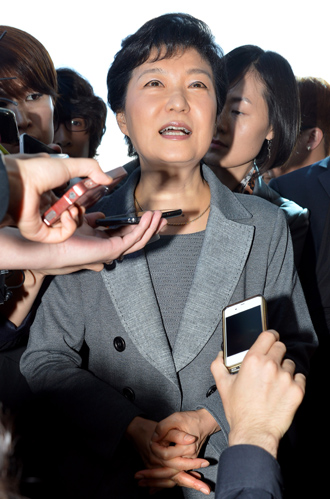 Park Geun-hye, presidential candidate of the ruling Saenuri Party, talks to reporters yesterday in Daejeon after she had a meeting with scientists at the Korea Advanced Institute of Science and Technology. [YONHAP]

Ahn Dae-hee, a former prosecutor and political reform champion in the presidential campaign of Park Geun-hye, said yesterday he will quit the campaign of the ruling Saenuri Party candidate if she doesn’t ditch Han Gwang-ok, a political heavyweight whom he indicted for corruption in the past.

Ahn held a press conference yesterday at the party’s headquarters and made public his opposition to bringing Han into Park’s campaign.

“When the committee and the candidate have different opinions, it is natural to respect the candidate’s opinion,” Ahn said. “But if it is a matter of principle that will taint the prospect for reform or critically tarnish the image of the candidate, I have to give honest advice.”

On Friday, Park brought Han into her campaign. The 70-year-old politician from Jeonju, North Jeolla, has had a 40-year career fighting against the conservative ruling party as a key associate of the late President Kim Dae-jung. By appointing Han, who was Kim’s Blue House chief of staff from 1999 to 2001, Park was trying to bridge the gap between the conservatives and the liberals and diminish the enduring regionalism in Korean politics.

While working as a prosecutor, Ahn investigated and indicted Han on charges of receiving bribes from a businessman in 2003 in return for using his influence to stop the shutdown of Nara Banking Corporation. Han was later convicted of the charges. He served time in jail but has called for a retrial.

Ahn said yesterday if his protest against Han’s appointment to the party’s Grand National Unity Committee isn’t accepted, the political reform committee won’t be able to perform its job.

“When a newly recruited key official on the election committee is someone who was jailed for corruption, who could possibly believe our efforts for political reform?” Ahn asked.

Ahn said he and other members of the political reform committee agreed Saturday that they will leave Park’s campaign if she insists on keeping Han.


Ahn joined the Saenuri Party in August to head the special committee on political reform. The surprise recruitment of a former prosecutor who investigated the party’s presidential election fund scandal in 2003 made him the chief driver of reform for the candidate.

Park faced another crisis as a confrontation between her two key economic strategists flared.

Kim Chong-in, who is heading Park’s campaign for so-called “economic democratization,” told the JoongAng Ilbo last Thursday that he could not push forward his agenda because of Representative Lee Hahn-koo, the floor leader of the party. Kim is pushing for drastic reform of the ownership structure of Korea’s conglomerates. Lee was reluctant to approve overly aggressive measures.

In an interview with the Hankyoreh newspaper on Saturday, Kim said he has given Park an ultimatum to choose him or Lee.

Lee said yesterday he has no intention of stepping down from his post as floor leader. “There are only 70 days left before the election,” Lee said. “I will work harder.”

Park yesterday said she has no intention of implementing a drastic overhaul of her campaign strategists.

“There are about two months left before the election,” Park said. “Changing everything to start from a clean slate would be like giving up on the election.”

Stressing internal unity, Park urged her campaign officials to focus on their jobs. “Whenever a crisis arises, the party is always in a mess,” she said. “Internal power struggles are typical in politics.”