Larger missiles to be deployed within five years

Larger missiles to be deployed within five years 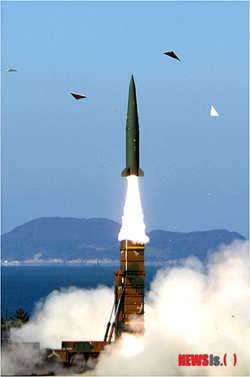 After the landmark Korea-U.S. deal on increasing the maximum range of South Korea’s ballistic missiles, the government is planning to deploy the new missiles by 2017, calling for a special state budget on the plan.

“Before the missile pact was renewed, we had been preparing for a new missile program, because we were sure that we would succeed in reaching an agreement with the United States,” a South Korean government official told the JoongAng Ilbo.

“So we have already asked the legislature to allocate 2.5 trillion won ($2.2 billion) of the budget to develop new missiles for the next five years.”

The official said that the South Korean military has already developed essential technology for the new missile development, so it wouldn’t be difficult to realize the goal of deploying them no later than 2017.

Shin Won-seok, an official at the Ministry of National Defense, also said on Sunday at a briefing that the previous 2001 missile pact didn’t restrict Korea to develop its own missile technology. So the military has accumulated its own skills until now and it won’t take much time for them to deploy new weapons.

Another government source also told Yonhap News Agency yesterday that the military proposed a bill to offer 500 billion won for next year’s missile development program to the legislature, and it will decide whether to pass it soon.

Shin In-kyun, the president of the Korea Defense Network, a private military think-tank, said the 800-kilometer (497-mile) missiles will be two-stage rockets. Shin told the Korea JoongAng Daily the range of the ballistic rockets exceeds 600 kilometers, taking it out of the earth’s atmosphere before falling to the ground. “Technically, it would take only two years to manufacture them,” Shin said.

However, some experts say that there are still unresolved matters in the missile agreement. Koo Bon-hak, an international studies professor at the Hallym University of Graduate Studies, told the Korea JoongAng Daily that the agreement still hasn’t allowed Korea to develop a solid-fuel rocket, which could be developed into an Inter-Continental Ballistic Missile (ICBM).

“Under the international law, there’s no restriction for us to develop a solid-fuel rocket, but we are not supposed to do that due to the Korea-U.S. missile agreement,” Koo said. “Neighboring superpowers such as China and Japan already have technology to develop it at the civilian level.”

Koo also said that the weight limit of an 800-kilometer missile should have been increased, up to 1,000 kilograms (2,204 pounds). “A heavier warhead raises a missile’s target accuracy,” Koo said. “So if we want to launch an 800-kilometer missile from a base in the southern region, where it is relatively safer from North Korea’s attack, the missile should be heavier than 500 kilograms to accurately bombard the North.”