Hangul school hits a snag on tribal island of Buton

Hangul school hits a snag on tribal island of Buton 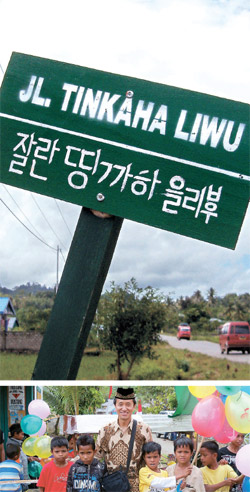 While today marks the 566th anniversary of the creation of the Korean alphabet, Hangul Day, efforts by one Indonesian minority tribe to use hangul as its official writing system - the first foreign community to do so - may fizzle out.

The state-run Korean language institute, Sejong Hakdang, or King Sejong Institute, with the support of the Ministry of Culture, Sports and Tourism, opened a school to teach hangul in Bau-Bau, a city on Buton island, in January, with the joint cooperation of Korea’s Kyungpook National University and Indonesia’s Muhammadiyah University of Buton.

But the Sejong school has been closed since Aug. 31 and the Korean language instructors have all withdrawn, the Culture Ministry, Hunminjeongeum Society and Kyungpook National University confirmed yesterday.

When the Cia-Cia, an indigenous tribe of some 70,000 people in Bau-Bau, were in danger of losing their native language because of a lack of a proper written language, hangul was introduced to the school system seven years ago.

Because hangul is a phonetic alphabet and considered efficient to learn, the city embraced the written language. The decision to use hangul in 2009 - the first case of it being adopted abroad - was met with warm reception by Korea. Then-Seoul Mayor Oh Se-hoon visited the city in December 2009, and the two cities pledged to expand cultural exchanges.

But the management of the institute faced difficulties over the past year, alongside financial difficulties on the side of Kyungpook National University.

And with further misunderstandings mounting between the city of Bau-Bau and the institute, the school shut down within seven months.

This is not the first obstacle between Korean institutes and the city of Bau-Bau.

The Hunminjeongeum Society, a Korean linguistic institute founded in 2007, initially had been active in providing textbooks and native Korean teachers for the indigenous students but had a falling out with the Bau-Bau city due to miscommunications last year.

Jung Deok-young, 51, who taught hangul on location, told the Yonhap News Agency yesterday that with the King Sejong Institute withdrawing from Buton, “There are currently almost no instructors qualified to teach hangul to the Cia-Cia tribe in Bau-Bau.”

Jung originally was sent to the Cia-Cia tribe by the Hunminjeongeum Society to become the first hangul instructor at the beginning of 2010 for nearly a year before returning to Korea.

At the start of this year, he was sent back with the establishment of the King Sejong Institute school, but again returned to Korea in August when the school shut down.

He has completed a second edition of a hangul textbook for the Cia-Cia tribe and admitted, “I thought I would be able to distribute the textbook to the students to continue to teach them and spent time editing it over and over again.” He taught students from elementary school to college while on the island.

There are currently almost no instructors qualified to teach the language in Bau-Bau, he said, with the King Sejong Institute withdrawing from the city.

A Culture Ministry official said yesterday that it will be looking for another Korean university to manage the King Sejong Institute operations in Bau-Bau and that “operation will resume as soon the school is decided upon.”