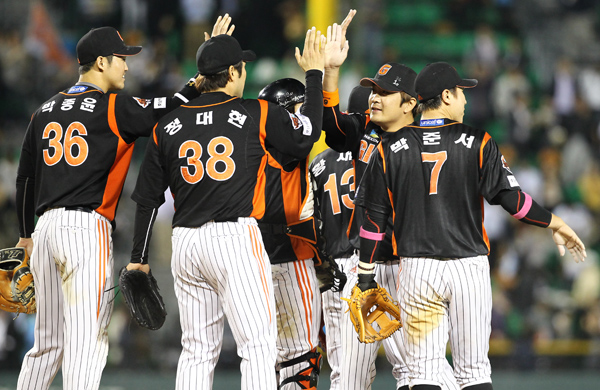 Lotte Giants players celebrate after beating the Doosan Bears 8-5 in Game 1 of their first-round playoff series at Jamsil Stadium on Monday night. By Kim Min-kyu


Pinch-hitter Park Joon-seo smashed a game-tying two-run shot in the eighth inning and Hwang Jae-gyun hit an RBI double down the third-base line in extra innings to lift the Lotte Giants to a Game 1 win over the Doosan Bears in the first round of the KBO playoff series in Seoul on Monday night.

A total of 12 pitchers took the mound in the over four-hour-long battle in front of a sold-out Jamsil Stadium. The Giants’ sixth pitcher, Kim Sa-yool, who kept the home team in check in the bottom of the ninth to force a 10th inning, got the win with Chung Tae-hyon earning the save after a scoreless extra inning.

Park was an unlikely hero for the Busan ball club, coming through in the clutch with an eighth-inning homer. He had just two home runs during the regular season and had never before hit one out of the park in the postseason.

The second matchup between the two clubs, scheduled for yesterday night, was expected to feature Shane Youman (13-7) of the Giants and Noh Kyung-eun (12-6) of the Bears on the mound at Jamsil Stadium. Game 3 will be held at Sajik Stadium in Busan tomorrow.

During Monday’s game, both teams blew early scoring opportunities - the Bears in the bottom of the first inning and the Giants in the top of the third - leaving runners in scoring position. The Giants got on the board first in the fourth, with three runs on four hits and one walk.

The Bears turned the tables on three errors in the fifth inning and made it 5-3 in the seventh before blowing the lead.