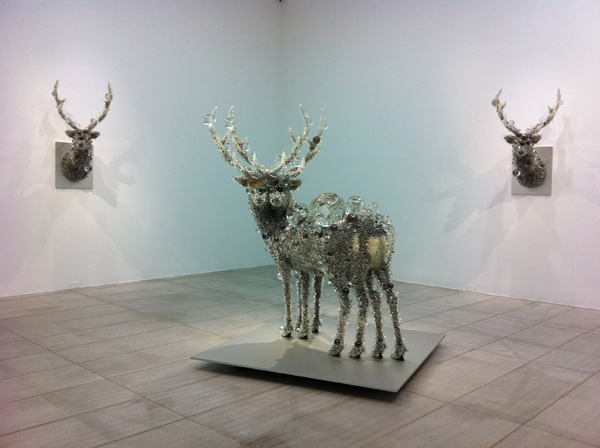 “PixCell - Double Deer #6,” a 2012 sculpture by Kohei Nawa, one of the most important young Japanese artists, is installed at a room of Arario Seoul Cheongdam. Nawa’s solo show titled “Trans” continues through Nov. 4.By Moon So-young


Those who catch a glimpse of Japanese artist Kohei Nawa’s work “PixCell ? Double Deer #6,” on display at Arario Cheongdam, might think they have astigmatism. The piece resembles how someone with double vision might see a deer: two overlapping heads, more than four legs and irregular lines. Actually, it is a deer taxidermy covered with crystal beads of various sizes, and the effect is intentional.

A closer look leads to a feeling of grotesque beauty from the dismantled and distorted images of the deer seen through the transparent beads and, at the same time, unease at the elusiveness of a precise image, or essence, of the deer. 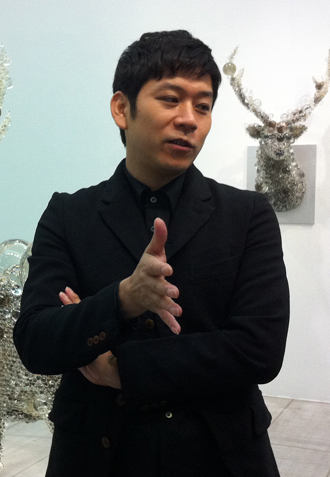 “Double Deer #6” is part of the PixCell series by Nawa, who has shown consistent interest in “humans’ visual perception, in particular in the digital era when images are pixelated, and whether the human eyes can catch the essence of other people or objects,” as the artist said at the press preview of his solo show at Arario Gallery’s Cheongdam branch in southern Seoul. The title of the series is a combination of the words “pixel” and “cell.” Nawa is holding his first large-scale PixCell series solo show in Korea at the Arario Gallery’s Cheongdam branch and Cheonan branch, South Chungcheong, through Nov. 4.

Last year, the 37-year-old Nawa became the youngest artist to have a solo exhibition at the Museum of Contemporary Art Tokyo.

In the solo show in Korea, titled “Trans,” he presents more than 40 representative works from the PixCell series and his recent “Trans” series.

In another room of Arario Cheongdam stands a line of nine sculptures. With vague forms of humans and fluid-like surfaces, some of sculptures seem to be swelling and others melting. They seem to be in the process of mythological transformation, condensed evolution or computer morphing. 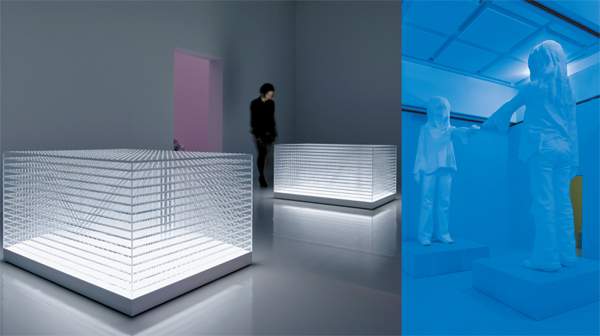 “AirCell A 37mmp” (left) is on display at Arario Seoul Cheongdam and “Polygon - Double Rio A” is at Arario Cheonan in South Chungcheong. Both are 2011 works by Kohei Nawa. Provided by Seiji Toyonaga


They are from Nawa’s “Trans” series. The artist made the sculptures using three-dimensional scans of persons and objects and then distorting the data by a computer technique called texture mapping

“They reflect the trances of the objects and humans in the space,” he said.

When the current show ends, the artist will not soon be forgotten. Nawa is working a sculpture titled “Manifold” that is 13 meters (42 feet, 7 inches) tall and 15 meters wide for the outdoor sculpture park at Arario Cheonan.

“‘Manifold’ is an unparalleled super-scale public art project with sporadically swelling geometrical shapes of circular forms that overwhelm and awaken the dormant anxiety in the viewer’s subconsciousness,” according to Arario.

Nawa was included in the list of “50 Next Most Collectible Artists” in the June issue of the American monthly art magazine Art+Auction.

His work has been collected by Tokyo’s Mori Art Museum, New York’s Metropolitan Museum of Art and others.