Economic blues tipped to last until 2016

Economic blues tipped to last until 2016

Korea appears destined for an extended period of anemic growth amid a global economic slowdown that may be verging on the brink of a second world recession in four years.

Analysts are now saying the economy could be mired in the doldrums until 2016 due to a perfect storm of contracting investment, ebbing consumer spending and a shrinking labor force.

The gloomy outlook is based on the premise that the government has failed to sufficiently encourage companies to invest in building facilities, which has resulted in low employment rates and sluggish private consumption.

Shoring up the negative sentiment, the Ministry of Strategy and Finance said yesterday that Korea is facing “high” uncertainty and a delayed recovery in terms of consumption and corporate investment.

“Uncertainty over economic situations at home and abroad remains high,” the ministry said in a report.

Despite growing levels of employment and stabilizing consumer prices, indicators for production, consumption and investment are looking increasingly negative, the report noted. 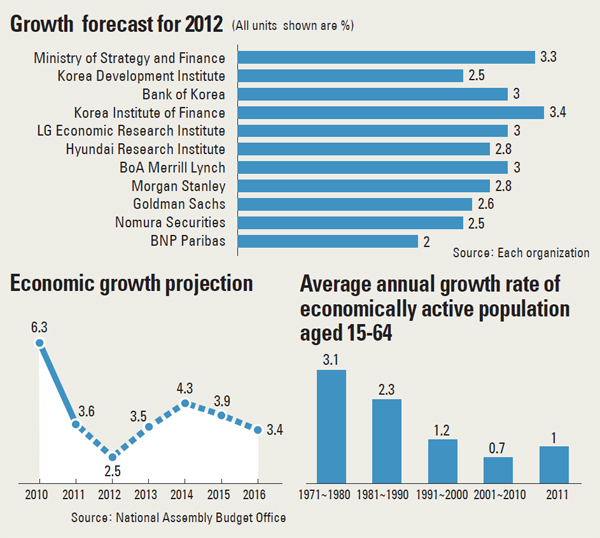 While Korea has beaten expectations in the past - actual economic growth between 2004 and 2007 stood at 4.7 percent a year on average - few expect a repeat of this scenario in the next few years.

Even the budget office expects the actual growth rate to hover around 3.5 percent for the next five years, 0.2 percentage point below the economy’s potential rate.

Such fears gain more credibility as policy makers increasingly focus on economic democratization, which puts equality ahead of growth, even though many pundits argue the latter is more important in order to offer universal and sustainable welfare services.

“To increase jobs and ease the income inequality between rich and poor, the economy needs to keep growing,” said Kim Chang-bae, a research fellow at the Korea Economic Research Institute (KERI). “When growth stops, businesses will make less profits and the government’s tax revenues will shrink.”

As the birth rate continues to drops, the size of the economically active population grew just 1 percent last year, down from 5.7 percent on average during the 1990s.

Another factor in the slowdown is that companies are becoming more risk averse.

Shin Hu-sik, the director of the budget office’s macroeconomic analysis division, said the country will experience weaker growth momentum as it has invested less in construction or facility renovation in the last few years.

Thinning work forces and investments have also undermined production in the manufacturing industry, which has been edging down for years, and in the service industry.

After assessing all this, the budget office now believes the actual annual growth rate until 2016 will more realistically average out at 3.5 percent a year, after scraping as low as 2.5 percent this year.

In contrast, the Ministry of Strategy and Finance is keeping faith with the following numbers: 3.3 percent growth this year and 4 percent from 2014 to 2016.

“Although it’s true a recovery might come later than expected, I still believe the situation will be better in the fourth quarter than the third quarter, and next year will be better than this year,” said Finance Minister Bahk Jae-wan on the first day of a parliamentary inspection of the Finance Ministry on Friday.

He said the economy may have hit rock bottom in the third quarter, assuming that the government’s stimulus measures start to show results in the final three months of the year.

In September, the ministry decided to spend an additional 5.9 trillion won ($5.2 billion) for this year and next, while also lowering a special consumption tax by 1.5 percentage points for buyers of cars and consumer goods like TVs and refrigerators in a bid to encourage spending.

But yesterday’s report said that consumption in the retail sector dipped 3 percent in September from the previous month, indicating that the measure has so far had little effect.

Even the real estate market, which the government was hoping to boost by exempting income gains tax for apartments valued at less than 900 million won that are purchased this year, has had a limited effect as housing transactions remain tepid.

The government also lowered the acquisition taxes on apartments bought within this year.

The frozen housing market in recent years has continued to put pressure on the construction industry. Many small and midsize construction companies have been struggling to stay afloat.

Most recently, Kukdong E&C, the construction arm of Woongjin Group, filed for a debt restructuring program after it failed to repay its borrowings to the financial industry as it was hit by falling sales and low operating profits.

Yet the government’s outlook remains relatively rosy compared to that of to other institutions.

The KDI, a state-run think tank, last month revised its projections for this year’s growth to 2.5 percent.

Other foreign investments banks including Morgan Stanley, Goldman Sachs and Nomura Securities also expect the domestic economy to grow at less than 3 percent. Even for next year, the outlook of these foreign institutions was less optimistic than the Korean government’s, with all three betting on lower than 4 percent growth.

The International Monetary Fund (IMF) was the latest organization to lower Korea’s economic outlook to below 3 percent for this year.

“Countries whose trade dependency is exceptionally high, or those with strong economic ties to China, have seen their economic growth outlooks readjusted,” said Park Mi-jeong, an analyst at the Korea Center for International Finance.

The IMF yesterday lowered its outlook on China’s economic growth for 2012 from 8 percent estimated in July to 7.8 percent yesterday. China is currently Korea’s largest export market, accounting for 27 percent of all outbound shipments in the first nine months of this year. The U.S. was the second-largest buyer, having gobbled up a 10.6 percent share.

Other pundits say it is natural for a country to see decreasing growth projections as it upgrades and cements its status as a developed country.

The KDI even projected in 2010 that Korea would see its potential growth rate drop below 2 percent after 2030.

“The efforts to increase the long-term potential growth rate should be continued by further opening up the market, increasing efficiency [in businesses] and securing more social capital,” said Kim Chang-bae, a research fellow at KERI.

Recently signed free trade agreements with the United States, European Union and several South American countries have been one way export-dependent Korea has moved to expand its market.

The deal with the U.S. is expected to raise the nation’s growth by 0.6 percent a year over the next decade, while the FTA with the EU is forecast to add annual growth of 0.56 percent, according to research reports from government organizations.

The budget office proposed three ways to improve the country’s fortunes: by lowering taxes for businesses and households or discovering new sources of tax revenue; encouraging more women to work by increasing spending on child care; and finding new growth engines in the manufacturing and service industries aside from IT, which currently leads exports.

“We need to be smart about where we spend money to maximize the economic effect due to widespread uncertainties stemming from the European financial crisis, which looks set to drag on, the slowing Chinese economy and our own weakened domestic economy,” said Ju Young-jin, director of the budget office.