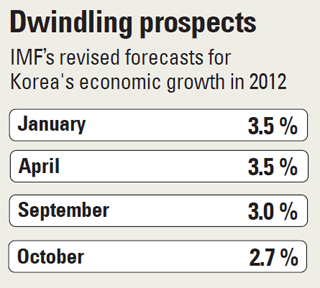 The International Monetary Fund once again cut its prediction of Korea’s economic growth for this year - just a month after it made its last downward adjustment.

It warned that the economic growth could be even worse if Europe and the United States fail to resolve their economic difficulties soon.

In its quarterly World Economic Outlook, the IMF projected the Korean economy will grow 2.7 percent this year, 0.3 percentage points lower than its previously revised outlook made in September.

This is the third time that the IMF has lowered its outlook on Korea this year. The cut reflects its projection of lower global economic growth. The IMF revised its outlook on growth of the world’s economy from 3.5 percent in July to 3.3 percent. Next year’s growth was also lowered from 3.9 percent to 3.6 percent.

The IMF said policies in advanced economies failed to rebuild confidence, while the crisis in Europe and in U.S. fiscal policy continues to “preoccupy investors.”

“Low growth and uncertainty in advanced economies are affecting emerging markets and developing economies through both trade and financial channels, adding to homegrown weaknesses,” Olivier Blanchard, an IMF economist, said in the report.

The outlook, however, was based on the assumption that the euro zone problems will be resolved with the central bank continuing to ease monetary policy while the U.S. will avert the so-called “fiscal cliff” - an expiration of tax cuts and new budget cuts mandated by various laws - through political compromise between the Obama administration and Congress.

“The U.S. fiscal cliff could entail significantly more fiscal tightening than assumed in the WEO projections,” the report said.

“If this risk materializes and the sharp fiscal contraction is sustained, the U.S. economy could fall into a full-fledged recession.”

It added that a failure to address the euro zone crisis and the U.S. fiscal cliff will hurt Asia’s trade-dependent economies because of lower external demand. Korea is notorious for its high dependence on trade, which accounted for 116 percent of the nation’s total GDP as of the first quarter this year. This is the highest trade dependency among the Group of 20 countries. Even Germany, which trails second, has a trade dependency of roughly 95 percent.

“It is difficult to achieve sustainable growth with such huge trade dependence because the economy is mostly affected by external changes,” said Ju Won, an analyst at Hyundai Economic Research Institute. “It is important to establish long-term measures that would help strengthen the domestic market.”

The Korean government still holds on to the 3.3 percent projection it made earlier this year for economic growth.

When setting the budget for next year, it used the assumption that Korea’s economy would expand 4 percent in 2013, much higher than other analysts think. The IMF outlook was released yesterday ahead of the World Bank-IMF annual meeting in Tokyo this week.