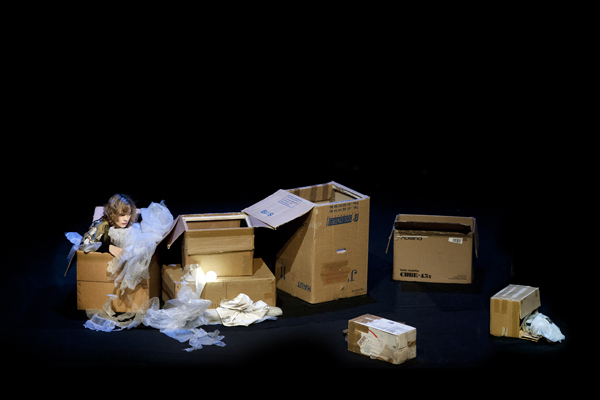 The French play “Murmures des Murs,” directed by Victoria Thierree-Chaplin, one of the daughters of Charlie Chaplin, comes to the LG Arts Center in southern Seoul from Oct. 18-20. See THEATER. Provided by the organizer

Oct. 16 and 17: Latvian violinist and conductor Gidon Kremer and his chamber orchestra, the Kremerata Baltica, are coming to Korea for the first time in three years.

Programs vary depending on the day of the show.

The concerts will begin at 8 p.m.

Oct. 23: First founded in 1930 as the official orchestra of the Soviet All-Union Radio network, the Tchaikovsky Symphony Orchestra is Russia’s oldest symphony and is considered to be one of the best.

The concert will be led by Vladimir Fedoseyev, artistic director and chief conductor of the orchestra.

The program includes compositions of the Tchaikovsky Violin Concerto and the Shostakovich Symphony.

Tomorrow to Sunday: After having won the Grand Prize and other prominent honors at the 2009 Korean Theater Awards, “Peer Gynt” is back with a newly upgraded cast and production team. Based on the Norwegian dramatic piece of the same name, this five-act play revolves around the colorful life of a vain poet, Peer.

The show begins at 8 p.m. on Thursday and Friday, and at 3 p.m. on Saturday and Sunday.

THE COMEDY OF K

Saturday and Sunday: The Hong Kong Ballet will be performing a contemporary drama that depicts the psychological insecurities the people of Hong Kong faced when the British transferred sovereignty of the region to China as well as their anxieties during the SARS epidemic.

Oct. 18 to 20: This French play is based on a woman living in a moving house who is surrounded by mercurial Venetian architecture and anonymous masked figures. Slowly, the woman seems to be losing her mind. Directed by Victoria Thierree-Chaplin, one of the daughters of comedian Charlie Chaplin, this play has received rave reviews and makes its way to Seoul.

Oct. 18 to 21: The Korea National Opera presents the acclaimed “Carmen.” The French opera has been performed numerous times at the world-renowned stage of the Orange Opera Festival in France and has been picked as the No. 1 opera Korean audiences aspire to see.

To Oct. 21: The popular musical is back after its performance in 2005, and this time, it will be shown at Sangsang Art Hall.

The story centers around the rock singer Hedwig, who after a failed sex reassignment surgery goes on an American tour. The musical starts at 8 p.m. Tuesday to Friday; 6 p.m. and 8:30 p.m. Saturday; and 7 p.m. holidays and Sunday.

Nov. 17 to 26: The Seoul Metropolitan Opera will be performing three of the most renowned operas composed by Mozart: “Don Giovanni,” “Cosi fan tutte” and “The Magic Flute.”

Friday to Sunday and Oct. 31: The 31st Korea Traditional Gukak Festival is to be held in Gyeongju, North Gyeongsang. Gukak is a genre of traditional Korean classical music.

The mayor of the city will participate in the opening ceremony, and the program for the first day will include several performances of traditional dance, pansori (traditional vocal and percussional music), and the gayageum, a Korean zither-like string instrument.

On Oct. 31, the festival will hold a one-day event in Seoul as well in the main theater of the National Gukak Center in southern Seoul.

For the Seoul festival, it starts at 7 p.m.

Admission is free of charge.