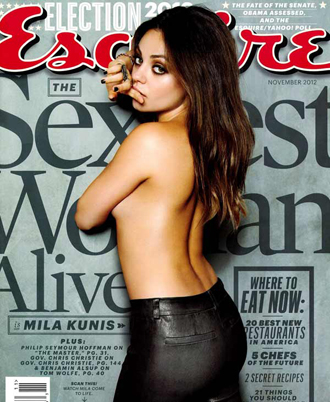 Actress Mila Kunis has been dubbed “the sexiest woman alive” by Esquire magazine in its November issue out this week.

Kunis, 29, a one-time star of the TV comedy “That ’70s Show,” was lauded by the men’s magazine on its Web site as “the most beautiful, opinionated, talkative and funny movie star that we’ve all known since she was nine.”

As a grown-up, the native of Ukraine electrified audiences with a solid performance opposite - and sometimes in bed with - Oscar-winner Natalie Portman in 2010 ballet movie “Black Swan.”

She recently showed her comic chops in the surprise summer hit “Ted.”

Next year she will star in “Oz: The Great and Powerful,” and she is the voice of Meg Griffin on the animated Fox comedy “Family Guy.”