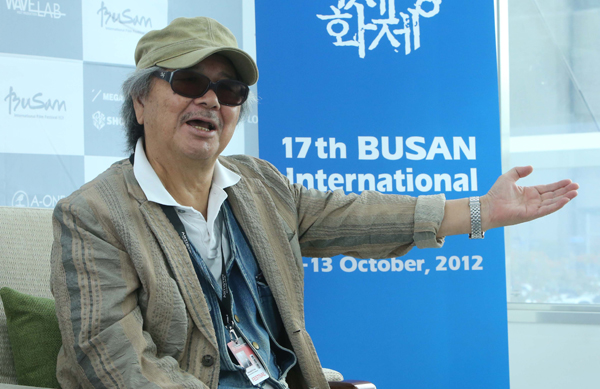 
For Koji Wakamatsu, making films has been a way of dealing with the trauma he suffered while incarcerated in Tokyo in his early 20s. He spent half a year behind bars for a crime he committed while in the yakuza, a vocation the rural immigrant from Miyagi Prefecture said he had to turn to in order to make a living.

Armed only with a high school diploma, as well as his anger toward society, Koji taught himself the craft of moviemaking and has become a legendary figure in Japanese indie cinema. Last Friday, the 76-year-old director received the Asian Filmmaker of the Year award by the Busan International Film Festival, which is under way in Korea’s southern port city. The award was granted to “honor his spirit of independent film as a rebellious auteur, and his never-ending passion for cinema,” according to the film festival’s organizers.

His 2008 movie “United Red Army,” which picked up the Best Asian Movie Award at the Berlin International Film Festival, is a good example of his defiant stance against the government. The movie follows the path of the extreme left-wing paramilitary group of the same name in the early 1970s, which shocked the Japanese government with minor terrorist acts but was apprehended before carrying out a plan on the scale of the sarin gas attack on the Tokyo subway a generation later by the religious cult Aum Shinrikyo.

His 2010 movie “Caterpillar,” which focuses on a war hero who returns home with severed limbs, also sheds light on the shadows of Japanese society. It competed for the Golden Bear Award at the Berlin International Film Festival that year.

So critics were surprised when he returned to the scene with “11.25: The Day He Chose His Own Fate,” which depicts the latter part of the life of Yukio Mishima, an author and political activist who committed suicide in 1970 after calling for full rearmament of the Japanese military.

It is one of three movies Wakamatsu made this year and took to be screened in Busan. The movie also drew much attention at Cannes.

In an interview with the JoongAng Ilbo in Busan, the director said that politically he is neither left- nor right-wing. However, he said he remains concerned about Japan’s increasingly nationalistic bent and criticized Japanese politicians for pouring oil on territorial disputes with both Korea and China.

Q. Why did you choose avant-garde author Yukio Mishima for the theme of one of your films? This seems a surprising choice in light of the rest of your oeuvre.

A. The United Red Army and Mishima had ideological differences, but they are alike in that they both stood up and tried to change society and the country, and got frustrated in the end. They put concern for the country ahead of their own private interests. I made the movies in the hope that we should not forget them. Politically, I am neither left- nor right-leaning.

What do you think of young Japanese today?

Young people care little for society or the country. When you go to anti-nuclear rallies, you only see old people. Youngsters are just playing games and looking at their smartphones. They have to try to resist the absurdity of the world and change it.

You seem quite dissatisfied with the state of the Japanese film industry.

There are many movies about dogs and cats or based on comics. They only want to make movies that are profitable. There are few directors who have the guts to face and fight the status quo. This shows that culture [in Japan] is on the wane.

Many people here are concerned about how Japanese society is becoming more nationalistic. Is this a legitimate concern?

There is not a single politician in Japan who worries about the future of Japan and its people. They are only aware of the elections, and that is why they are claiming that the Dokdo islets [called Takeshima in Japan] and Shenkaku Islands [called the Diaoyu Islands in China] belong to Japan.

Because they do not teach the history of [Japan’s] invasion properly, people believe their claims are true. People don’t understand why Korea and China are up in arms. Japanese politics are in a sorry state, and the education is full of inaccuracies.

After coming out of prison in my early 20s, I began to write novels to express my anger, and then I got involved in the movie community.

You are continuing to direct movies without taking a break, despite your age.

Thanks to the success of “Caterpillar,” I was able to direct three movies this year. It’s difficult to make a movie when your body has been subjected to so much surgery. But I feel like I gain strength whenever I sit in the director’s chair. Every movie I make, I get to think, “Now I can die without regret,” but soon I feel like making another movie. Movies are a kind of medicine that extends my life.

What do you have in the pipeline?

A movie about the earthquake and Fukushima nuclear disaster on March 11, 2011. I want to show people’s anger toward those who have been trying to conceal the truth. I also plan to create a work focused on the wartime sex slaves in Okinawa.