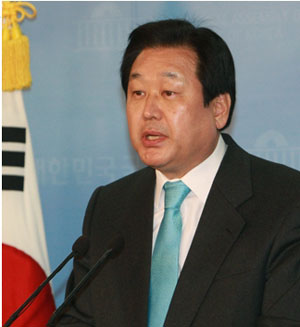 “He will assume an important role on the election campaign committee,” Park said yesterday about Kim, a former four-term lawmaker who served as the party’s floor leader from 2010 to 2011.

“Problems will soon be sorted out,” Park said.

The one-time front-runner’s campaign has been rocked by internal discord among her chief strategists. 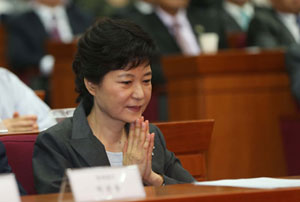 Ahn Dae-hee, a former prosecutor handpicked by Park to lead her promises for political reform, threatened to quit in protest of her recent recruitment of Han Gwang-ok, a political heavyweight in the Jeolla region and a loyalist of former President Kim Dae-jung.

His appointment was part of her “Grand National Unity” drive to bring together elements of the opposing conservative and liberal camps.

Ahn protested Han’s recruitment because he has been convicted of corruption. As a prosecutor, Ahn was the person who indicted Han.

Meanwhile, Kim Chong-in, architect of Park’s “economic democratization” pledge, also threatened to leave if Park maintains Representative Lee Hahn-koo as the floor leader of the party. They have been fighting over how tough to be on chaebol, or Korea’s conglomerates, in the service of so-called economic democratization.

A group of reformists inside the party have also demanded that Park loyalists step down from leadership positions in the campaign. As a result, Representative Choi Kyung-hwan resigned as chief of staff Sunday.

Park stressed yesterday that her goals of political reform and grand national unity are not mutually exclusive.

She also said that different opinions will eventually benefit her campaign.

The meeting also concluded that Kim Moo-sung would take charge of Park’s campaign.

The 61-year-old former lawmaker from Busan supported Park for a long time. He oversaw her campaign during the presidential primary in 2007, which Park lost to President Lee Myung-bak.

Their relationship withered when Kim challenged her decisions. Kim disagreed with Park’s decision in 2009 to support the relocation of most government offices to Sejong City.

The relationship was repaired after Kim accepted the decision of the party, under Park’s leadership, to deny him a nomination in last April’s general election.

He stayed with the party and supported the other candidates, helping to prevent an exodus of disgruntled politicians who, like him, were denied nominations.

Kim joined Park’s campaign at the end of last month.

Reformist lawmakers welcomed Kim’s role as a “control tower” for the campaign.

“Kim is a great planner and has systemic leadership,” said Representative Kim Sung-tae, a leader of the reformists. “If he leads the campaign, I expect to see more lively changes.”

He also said the role of Chairman Hwang and floor leader Lee ended when Park won the primary, calling them a “wall of people” around the presidential candidate. “Their role has ended,” Kim said. “We need a field commander who can actually fight battles.”