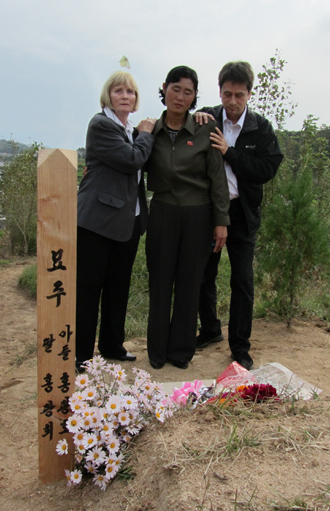 JENA, Germany - The tragic love affair between a German woman and her North Korean husband, who were separated for more than half a century, is over after the man died last month.

The husband and wife were separated in 1961 and were reunited only once in North Korea in 2008 for 12 days.

That was the first time North Korea allowed a foreigner to enter the country for a private family reunion.

Pyongyang had given permission for Renate Hong to return for a second reunion on Sept. 30. But Hong died of a stroke 26 days before she was to arrive, possibly over excitement about the impending reunion.

“For the past four years, I tried to have a second reunion with my husband and the North Korean regime had finally approved it,” she told the JoongAng Ilbo and JTBC on Saturday at Berlin-Schonefeld airport on her return from Pyongyang. “I was supposed to meet with him on the Chuseok holiday.

Sources told the JoongAng Ilbo that the North Korean Red Cross sent a message to the German Embassy in Pyongyang, saying Hong Ok-geun “suddenly passed away from cerebral hemorrhage in the early morning of Sept. 4.”

Renate first met her husband-to-be in 1955 in a chemistry class at a university in Jena, East Germany. She was 18, and he was 21. She says she fell in love with the handsome and humorous Korean after he courted her at a freshman welcoming party with wonderful waltz steps. They married in 1960 despite her family’s disapproval.

The couple was separated in April 1961 when North Korea ordered all its students around the world to return home.

Hong left behind the couple’s first son, Peter Hyon-chol Hong, and his wife was five-months pregnant with their second son, who would be named Uwe. Later he adopted the Korean name Hyeon-ho.

She never remarried. After the JoongAng Ilbo interviewed her in November 2006, her desire to meet the man she loved got international attention and support from the United Nations and the Red Cross. North Korea found her husband, who had remarried and had one daughter and two sons. 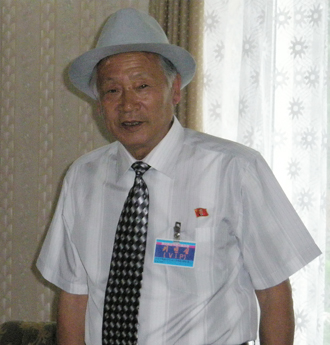 In 2008, a year and eight months after the JoongAng Ilbo’s report and 47 years after they were separated, Renate and her two sons reunited with Hong in Pyongyang. Hong’s oldest daughter in North Korea joined them.

“My father also could not say a word,” said Uwe after that trip. “He silently walked toward us and hugged us one by one.”

The records say that Hong fell in the front yard of his house at around 10 p.m., on Sept. 3, and became unconscious. His left leg was entirely paralyzed and shaking.

Six hours after he was hospitalized, he died. The records say he didn’t smoke or drink, and he had no particular health problems previously, although he showed symptoms of high blood pressure.

“Mr. Hong talked excitedly about the [second] reunion with his [former] wife and sons, and then he left the house to urinate [a toilet was in the yard],” a doctor named Yun Ki-sook said in the medical treatment record. “But he fell in the yard and lost consciousness.”

“It seems that the cause of his death was that he got too excited,” Renate told the JoongAng Ilbo and JTBC, “waiting day after day for the reunion.”

North Korea allowed her to visit her husband’s tomb in Hamhung, South Hamgyong Province, a northeastern city. She traveled with her son Peter and was accompanied by her husband’s daughter from his second marriage.

“It’s very rare that North Korea allows a family to visit a tomb and pay their respects,” a foreign official in Germany told the JoongAng Ilbo.