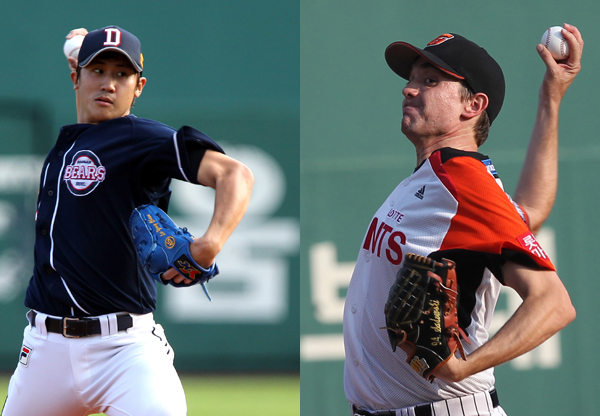 
Putting a second straight win over the Doosan Bears behind them, the determined Lotte Giants returned to their ballpark in Busan yesterday to ready for tonight’s critical Game 3.

At stake is not only a berth to the semifinal series, where they would face the SK Wyverns to continue their quest for a first league title since 1992, but also a chance to break the “Doosan Curse.” The Giants are no strangers to blowing playoff series leads when up against the Bears.

Moon Kyu-hyun hit a game-tying RBI single in the seventh inning and substitute catcher Yong Deok-han hit the go-ahead homer in the ninth before the Giants closed out a 2-1 win over the Bears in Game 2 of their best-of-five playoff series Tuesday night. After squeaking out a victory in Game 1, the Giants lead the series 2-0 and are one win away from advancing.

Game 3 will be held at Sajik Stadium at 6 p.m. tonight. Former San Francisco Giants pitcher Ryan Sadowski (8-8) and Lee Yong-chan (10-11) will start on the mound for Busan and Seoul, respectively.

The Bears will have to win three games in a row to advance to the semifinals, a rare feat in KBO history. But they have done it before - recently. In 2010, Doosan came back from a 2-0 series hole against the Giants to shock the Busan club. In 2009, Doosan rebounded from a Game 1 loss to snag the series.

The bitter memories are in the back of the mind of Giants manager Yang Seung-ho, who took the helm of the ball club after the 2010 season.

“As a manager, I need to paint a picture of a fourth and fifth game,” Yang told reporters after Tuesday’s game.

“As we have memories of suffering three straight losses after two straight wins in 2010, I will deal with the third game as if it were the first.”

The Giants are known to have the most raucous home fans in the league and that worked in the club’s favor during the regular season. The team, which finished fourth in the standings, recorded 35 wins against 27 losses in Busan for the season compared with 30 wins and 35 losses in away matches.

But that magic hasn’t carried over to the postseason in the past. They lost all of the four home games against the Bears in the first playoff rounds in 2009 and 2010.

In 2008, the Giants also lost both home games in the first playoff round against the Samsung Lions. Last year, when they advanced directly to the second round of the playoff as the runners-up in the standings, the Giants lost two of three home games against the Wyverns.

Hoping the Doosan Curse will strike again, the Bears will start Lee, who has shown remarkable strength against the Giants this year.

His ERA for the season is 3.00 but the figure drops to 1.07 in three games against the Giants. Lee recorded his first career complete shut-out in a Sept. 11 game at Sajik Stadium, allowing only four runs and one walk over nine innings and striking out 11 in a 4-0 win.

Sadowski recorded a 4.32 ERA for the season and a 2.18 ERA against the Bears. He started in the second game of the first playoff round against the Bears in 2010, shutting out the side through six innings with seven strikeouts, helping the Giants win 4-1.

At Tuesday’s game at Jamsil Stadium, Yong, who replaced Giants main catcher Kang Min-ho who had his eye hit by a ball during the first game, hit a pitch from the Bears’ second pitcher Hong Sang-sam in the top of the ninth, handing him the loss.

Hong allowed a game-tying two-run homer to pinch-hitter Park Joon-seo in the first game. “I feel good about the home run but I also feel sorry about my previous club Doosan,” said Yong, who was traded from the Bears in June.