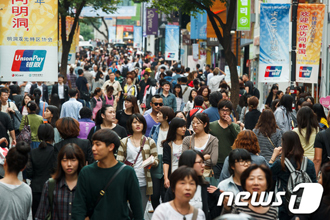 Rapper Psy introduced the world to the concept of “Gangnam Style” in his runaway hit song.

And now a lot of tourists want to see what Gangnam is all about for themselves.

The Korea Tourism Organization’s (KTO) overseas branches, such as the one in New York, are coming up with promotions that piggyback on the popularity of Psy’s song.

“The New York branch is preparing to attract tourists using Psy’s ‘Gangnam Style,’ but we can’t talk about specifics yet,” said an employee at KTO.

The public corporation recently posted a banner with a picture of Psy doing his now-famous horse dance on its English Web site. When you click the banner, it changes to a panorama of tourism sites in Gangnam such as beauty shops in Cheongdam-dong, and Garosugil in Sinsa-dong, the most fashion conscious and trendy street.

Other local travel agencies in New York are making inquiries to the KTO’s New York branch to see how they can jump on the bandwagon.

The tourism industry expects that many tourists will now migrate from northern Seoul and its palaces to the trendier Gangnam area in southern Seoul.

According to the hotel yesterday, the package tour was first proposed by Novotel Australia, which realized the popularity of Psy and his song.

“Psy is scheduled to hold a concert in Australia next Monday,” said an employee at Novotel Ambassador Gangnam. “Novotel Australia expects that tourism demand to Korea will surge. We plan to launch a product that combines hotel rooms and tourism in Gangnam.”

The Gangnam District Office also plans to increase its Gangnam City Tours, which it has been operating three times a week since 2008.