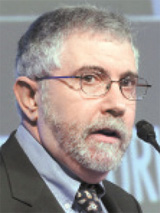 The financial dramas riling the euro zone and the United States are no riddle and economists know that solving them requires getting governments to increase their fiscal spending, according to Paul Krugman, a professor of economics at Princeton University.

“It is not at all a mysterious crisis. The solutions are clear,” he said at the World Knowledge Forum yesterday in Seoul. “If [all of the governments try] to spend less at the same time, all that happens is that all of our incomes go down.”

But he admitted that other issues were throwing spanners in the works.

“The problem is political. The economics are very simple and easy,” he said, adding that economic solutions are “almost impossible in an election year.” The U.S. presidential election occurs on Nov. 6.

To save troubled Greece and Spain, Krugman said governments should boost their fiscal spending rather than pursue austerity measures. He took the United Kingdom as an example, saying that it implemented a tightened fiscal policy in the 1920s but this turned out to be a failure.

He attacked the ideas of fiscal austerity in Europe as “ineffectual” in terms of improving failing economies like Spain and Greece.

Krugman gained fame after predicting both the 1997 Asian financial crisis and 2008 U.S. subprime mortgage crisis. He was awarded the Nobel Prize for Economics in 2008.

He compared Spain’s housing bubble to that of Florida during the 2008 U.S. crisis, noting that Florida benefited from the financial support of the U.S. government, while for Spain this is not an option.

“I’m of the view that the euro was a mistake,” Krugman said, adding that if he could go back to 1992, he would tell the EU not to adopt a single currency.