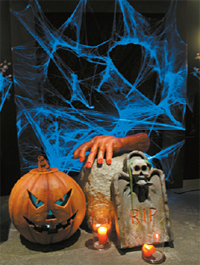 Oct. 26 and 27: The hotel’s bar, Bar Rouge, will be holding two Halloween parties under the theme of heroes and villains.

Highlights of the events include club music by a live DJ, cocktail shows and prizes for the best-dressed guests. Make-up artists will be present to offer free Halloween face-painting. In addition, tarot card readings will be available for 1,000 won ($.90). Proceeds from the card readings will be donated to the Korea Student Aid Foundation.

The party will start at 8:30 p.m. on both days and admission is priced at 45,000 won. Upon arrival, guests will be offered two drinks and a Halloween snack box and the first 150 people to purchase tickets will be presented with gift sets that include samples of several products from the cosmetic brand Benefit. Guests who reserve tickets through the hotel’s Facebook page can bring one guest for free.

To Dec. 15: The hotel is presenting the Lovely Rose Package targeting honeymooners. The package consists of a night in a deluxe room or spa, duplex or corner suite; a bottle of champagne; a Caprese salad; and a Honeymoon Body set that includes bubble bath products.

Guests are also presented with two breakfast buffet vouchers and free admission to the fitness center and indoor swimming pool. For guests who have to catch early morning flights, the hotel prepares simple breakfasts instead of breakfast buffets.

The price starts at 275,000 won, excluding tax and service charges. 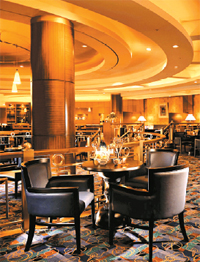 To Dec. 31: The hotel’s Trevi Lounge is presenting the G.H. Mumm & Cie champagne promotion, the official champagne brand for Formula 1, in celebration of the F1 Korea Grand Prix that is to be held on Monday.

A full bottle of the champagne is priced at 120,000 won. Guests are also invited to enjoy a glass of the beverage with an appetizer at the price of 25,000 won. There will be a special giving away of a Korean designer label Johnny Hates Jazz collaboration T-shirt. 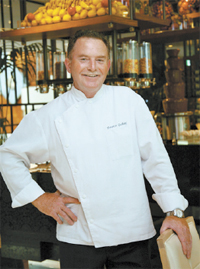 Guibert is a former French Michelin Star chef with a culinary career of over 37 years. He had previously worked for Novotel Ambassador Gangnam from 1997 to 2001, but this time, he will also be supervising the kitchens of Grand Ambassador Seoul and Novotel Ambassador Doksan as the Area Chef.

Having started his career at 15, Guibert worked in several Michelin Star restaurants in Lyon and Paris before moving to Singapore, Mauritius, the Philippines and Korea. Just before his comeback, Guibert was at Shandrani Resorts & Spa in Mauritius as its executive assistant manager in charge of 334 employees in the kitchen and the food and beverages department.

To Nov. 18: The Lobby Lounge will begin the third season of its Fruit Dessert Buffet. The buffet will be available Friday, Saturday and Sunday from 12:30 to 3:30 p.m.

The Lobby Lounge already received rave reviews with its previous two buffets: one themed after strawberries in the spring and the other on cherries and berries in the summer.

This season’s menu was selected based on the combined experience of patissiers and guest feedback.