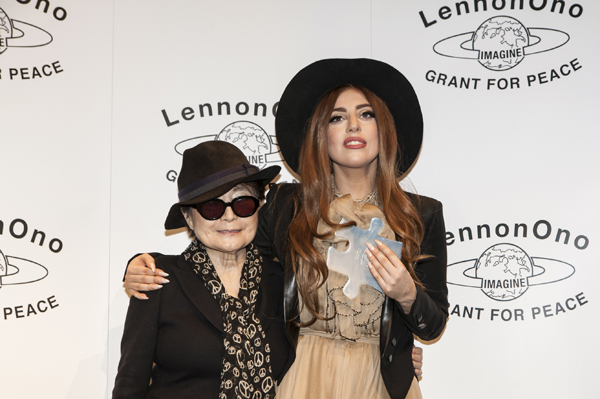 REYKJAVIK, Iceland - Pop star Lady Gaga was awarded a peace prize by Yoko Ono in a ceremony in Iceland on Tuesday.

Peace activist Ono said the LennonOno Grant for Peace, established in the name of her late husband, former Beatle John Lennon, rewarded Lady Gaga for combining stardom with activism and changing “the mental map” of the world.

“Lady Gaga is in a position of No. 1 as a singer songwriter,” Ono told Reuters Television. “And when you are No. 1, you don’t want to risk yourself. And she did.”

Grammy-winning Lady Gaga, who shot to fame with her debut album “The Fame” in 2008, accepted the puzzle-shaped award in Reykjavik along with a monetary prize that she said she will give to the Elton John AIDS Foundation.

Gaga said she would continue to “communicate compassionately to the world and its leaders,” and dedicated the award to “youth empowerment around the world.”

“I dare you to be compassionate in a cynical age,” she added.

Last month, at an event in New York City, Yoko Ono awarded the prize to the members of Pussy Riot. Nadezhda Tolokonnikova, Maria Alyokhina and Yekaterina Samutsevich were sentenced to two years in jail in Russia for staging a “punk prayer” in Moscow’s main cathedral. Tolokonnikova’s husband accepted the grant on behalf of the three women.