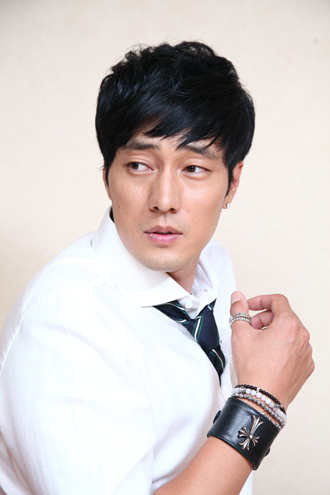 So Ji-sub says he learned martial arts for two months to master action scenes in “A Company Man,” which is set to hit theaters nationwide today. Provided by Ilgan Sports

So Ji-sub is best known as the rough-edged, tough-guy detective in the drama “Phantom.” In his return to film, the 35-year-old actor takes on an even more macho role as a hit man disguised as a regular office worker in “A Company Man.”Ilgan Sports, an affiliate of the JoongAng Ilbo, sat down with the actor to discuss his role in the film as well as his plans for the future.

Q. It seems like the action scenes from “A Company Man” were more challenging than those in your previous films.

A. It involves martial arts used in the Russian Special Forces. I was surprised as well when I was shown what I had to do because the moves were so quick. I had to practice for two months in order to get them right.

They seem similar to those seen in movies “Taken 2” and “The Man from Nowhere.”

I thought that as well, so I watched a lot of recent action movies to see whether the scenes have some resemblance, but fortunately, they didn’t. If you watch this film and compare it to “The Man from Nowhere,” you’ll see that there is a difference.

Have you thought about retiring?

I think about it a lot. I am a shy person, and that’s a minus when working in the entertainment industry. I only feel at ease when I’m in front of the camera and acting, but that’s it. An actor has to experience as much as possible, but with my personality, it’s hard. Well, I’ve done this for the past 17 years and I think I have been okay [laughs].

How was wearing a full suit for your roles in both “A Company Man” and “Phantom”?

My necktie was so uncomfortable. I was used to showing myself in comfy clothes, but by wearing a suit, it felt like my actions were too awkward. It’s funny to think that back when I was in high school, my dream was to become a salaryman and to go to work every morning wearing a necktie.

Do you have any interests other than acting, such as producing or in directing?

I’m not really interested in directing or any other jobs related to film. Acting is hectic enough. On the other hand, in terms of company management, I’m thinking about investing.

How is your music production going?

I’m thinking about making a song after promoting this movie. I’m only pursuing music because I like it and it’s also another way to meet my fans - singing my songs to them. I like hip-hop, so I only focus on rapping. To be honest, I’m not that good of a singer.

You’re not very talkative, and you spend a lot of time by yourself. But recently, it seems like you have become much more cheerful.

I made some efforts and I noticed that if a main actor doesn’t say or do much on set, the staff becomes uncomfortable, and I can’t let that happen. I joked a lot, and the studio became much more enjoyable. I think I’m slowly changing a bit.

Don’t you want to be in a relationship?

I want to get married now. I’m old enough and I want to meet someone who can be by my side for the rest of my life. But I don’t really go out much and I don’t enjoy drinking parties so it’s not easy to meet someone. Also, people don’t want to set me up on a blind date because they think it’s too hard to find someone for me.

There were rumors you had some kind of a romance with actresses such as Han Ji-min.

I heard that there was even a press interview for my wedding, and it sounded so real that I almost did have one.