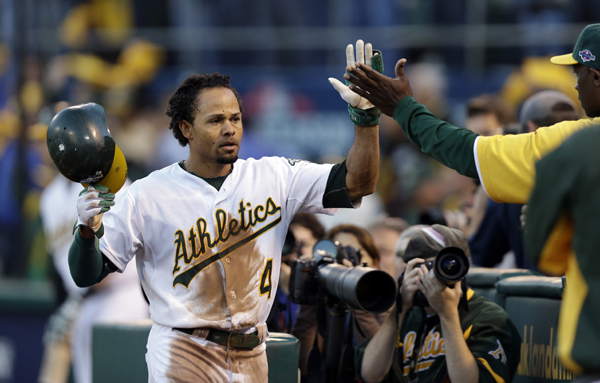 Oakland Athletics left fielder Coco Crisp celebrates after scoring on a single by Yoennis Cespedes during the first inning of Game 3 of the Athletics’ American League division baseball series against the Detroit Tigers in Oakland, California, Tuesday. The Athletics won 2-0 to avoid a sweep. [AP/YONHAP]


Coco Crisp banished the memories of a costly defensive error with a spectacular catch that sparked Oakland to a 2-0 victory over Detroit on Tuesday as the A’s avoided being swept in their American League Division Series.

Crisp, who dropped a catch in center field to gift the Tigers runs in a Game 1 loss, made a leaping grab at the wall to rob Prince Fielder of a second-inning home run as the Athletics cut the best-of-five series deficit to 2-1.

“Coco robbing the homer kind of set the tone. I can’t say enough about the defense,” Anderson told reporters after returning from a stomach injury that had sidelined him since Sept. 19.

Anderson had earlier returned to action from a near 15-month absence in August when he completed his recovery from Tommy John (elbow reconstruction) surgery.

“You couldn’t really script this, but it worked out,” he added.

Oakland is hosting the final three games of the series and will be hoping for a repeat of the manner in which they ended the regular season with a three-game sweep of the Texas Rangers to steal the AL West title on the final day.

Game 4 is on Wednesday at The Coliseum, which welcomed playoff baseball for the first time since 2006 with a raucous, yellow towel-waving crowd of more than 37,000.

As Anderson kept Detroit’s hitters at bay, Yoennis Cespedes gave the Athletics an early lead with an RBI single in the bottom of the first inning before Seth Smith added a solo home run in the fifth.

Detroit starter Anibal Sanchez was also solid in allowing just two runs in 6 1/3 innings of work but it was not enough to finish off a resilient Athletics team that has performed brilliantly as a unit since the All-Star break.

The Tigers were held to just four hits to Oakland’s five.

Triple Crown winner Miguel Cabrera recorded a hit in the ninth and is batting .333 for the series, though he has yet to record an RBI in three games.

The unfortunate Fielder grounded into a game-ending double play against Grant Balfour, who got the save, to finish hitless despite belting a deep drive in the second that appeared certain to tie the score.

The winner of the series will face either the New York Yankees or the Baltimore Orioles for the American League title.

The San Francisco Giants took advantage of two Cincinnati miscues to beat the Reds 2-1 in 10 innings and avoid elimination from the National League Division Series on Tuesday.

The visiting Giants, who had just one hit in the first nine innings, broke through in the 10th thanks to a passed ball and an error to beat Cincinnati, who lead the best-of-five playoff series 2-1.

“This game was do or die for us,” Giants manager Bruce Bochy told reporters. “We were in a position to have to win.