AirAsia boss has no plan to take over local LCC

AirAsia boss has no plan to take over local LCC 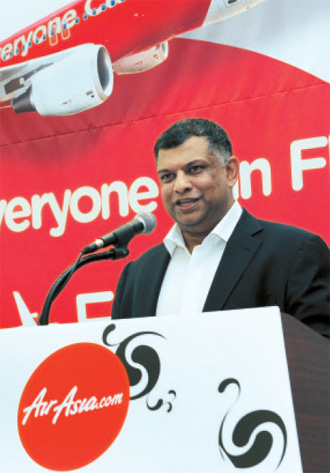 AirAsia plans to expand its business in Korea but not by buying a local low budget carrier despite rumors to that effect, CEO Tony Fernandes said yesterday.

The 48-year-old businessman said he has not yet mapped out the launch of AirAsia Korea, but indicated that he would like to do business in the country in future. He was speaking at the Press Center in central Seoul for the official launching ceremony Air Asia Japan’s Incheon-Tokyo route.

“Korea has become a very strong cultural center for Asia, and we would love to be in this market,” said Fernandes, who owns a house in Busan and is an avid user of the free Korean messaging app KakaoTalk.

However, the energetic entrepreneur who also owns Queens Park Rangers, an English Premier League football club, and the Caterham (formerly Lotus) F1 Team, said that he isn’t thinking about buying T’way Air Lines, a local LCC that is known to be in financial trouble.

“It’s not my preferred choice,” said the owner of the largest low-cost carrier in Asia. “But you never say ‘never.’?”

AirAsia runs over 150 routes with 115 aircraft, including one from Kuala Lumpur and Incheon. However, with the recent launch of routes from Incheon and Busan to Tokyo, the joint venture with All Nippon Airways that was founded on August hopes to attract more Korean passengers.

“I never thought I would launch this flight when I started this business,” he said. “This is one of the highlights of my career.”

The founder of Tune Group, which owns AirAsia, was also confident that it can compete against local airlines and Japanese competitors like Peach Aviation in the Korean market with its pricing strategy.

“Our advantage we have against other low cost carriers is our low cost and strong network in Asia,” he said. “But the beauty of AirAsia is that we don’t take other people’s market share, but grow that market.”

Although still officially requiring a stamp of approval from the Ministry of Land, Transport and Maritime Affairs, AirAsia Japan’s international route to Incheon is due to start on Oct. 28.

Fernandes said he also hopes to line up more foreign connections to cities like Jeju and Daegu.

To celebrate the launch, the airline said it will offer a discounted one-way fare from Incheon to Tokyo for 30,000 won, which includes 28,000 won airport tax, for those who book via the company’s Web site by next Wednesday. After this, the same ticket will cost from 100,000 won to 400,000 won.

“Probably in two years we could be looking at about 10 to 12 flights in Korea under Air Asia’s name,” he said.