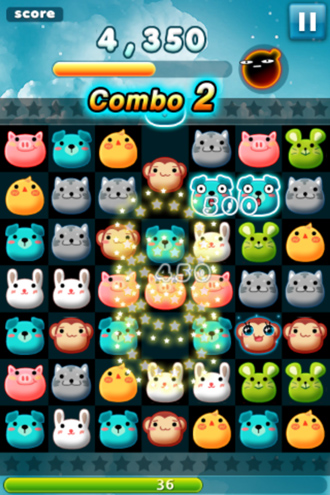 A year after the immensely popular Angry Birds mobile/video game swept the globe, Korea has become infatuated with Anipang, a mobile puzzle game from a small Korean developer that has emerged as a cultural phenomenon transcending both age and social barriers.

A long list of Anipang-related episodes attests to the growing popularity of the free app, which can be downloaded via the nation’s most popular mobile messenger, KakaoTalk.

These include: a photo circulating on cyberspace showing songpyeon, or a kind of tteok eaten during the recently ended Chuseok harvest holiday, made in the shape of the game’s animal characters; a three-day Anipang match hosted by Lotte Department Store last weekend with a cash award of 1 million won ($897) for the winner; and the rise to fame of unknown poet Ha Hyun-wook after he wrote an epigram entitled simply “Anipang.”

“We’ve been amazed to see Anipang make such an unexpected splash,” said Huh Yang-il, a spokesman with Sundaytoz, the game’s developer. “We’re also proud to learn that those people who were least likely to play the game have become our users.”

One example is this Choi Jae-sung, a 49-year-old lawmaker from the opposition Democratic United Party. He was caught on camera last Thursday playing the game on his smartphone during a party meeting. As criticism mounted, he issued an official apology on his Twitter account on Saturday.

Chung So-hyun, a 33-year-old government official, was turned onto the game by her mother, a businesswoman in her late 50s. “My mom has never played any computer or mobile game in her life. But having recently bought a smartphone, she is now obsessed with Anipang, even teaching me how to get better scores,” she said.

“I had never imagined someone of my mom’s generation would fall for a mobile game.”

The game’s simple nature is seen as major factor to its broad appeal. Users swipe the screen with their fingers to move animal characters around and line up three identical icons in either a horizontal or vertical line, after which they explode. “Ani” comes from the word animal and “pang” is an onomatopoeic word used to refer to explosions in Korean. 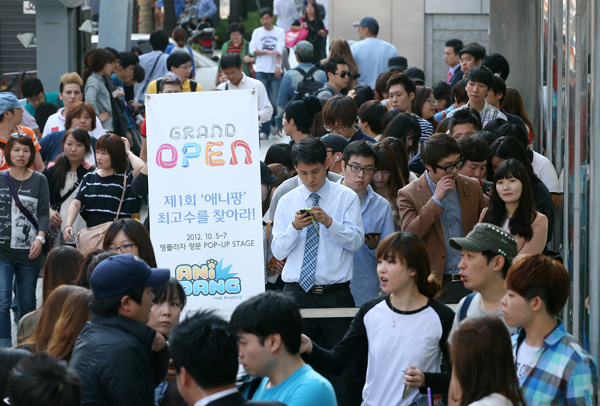 Hundreds of people line up in front of Lotte Department Store’s main branch in central Seoul to participate in a three-day Anipang competition that wrapped up on Sunday. The player with the highest score received a cash prize of 1 million won (897 dollar). The store ran the event to celebrate the opening of its remodeled Young Plaza building. [YONHAP]


More importantly, the game enables users to browse the rankings and scores of their KakaoTalk friends and contacts, igniting a strong sense of competition and, occasionally, frustration.

“I can feel I’m increasingly addicted to this game but my determination to quit dies on the vine whenever I catch those who I see as being clumsy outranking me. It makes me think I can do better than them,” said Lee Young-seok, an office worker.

“Anipang fever mirrors the competitive spirit prevalent in Korean society, whereby everybody thinks they should be the winner,” says Kim Hyun-chul, a local psychiatrist.

Catering to this trend, a mid-level employee at a trading department of Kookmin Bank, has even published a five-page PDF document called the “Anipang Manual.”

Lee Jong-gil, whose top score is 712,832, provides tips such as how to grab your smartphone for faster finger movements. To improve users’ scores, he discusses character placement patterns in detail along with screen shots and advises users to go for “combos” or at least two pang explosions every few seconds.

In less than three months, the game, which is only available in a Korean-language version, has officially garnered 17 million players worldwide, but in reality most are believed to be based in Korea, which has 30 million smartphone users. This compares to 62 million KakaoTalk users globally.

Ten million people play the game at least once a day, while 2 million users are hooked up at any one time on average. In comparison, Angry Bird, which was created by a Finnish company, has posted a record of 30 million simultaneous users. 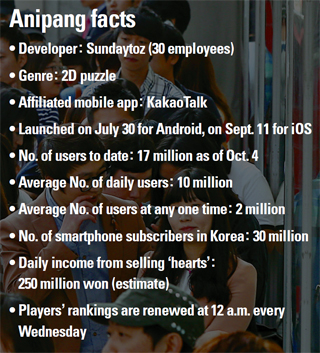 To prevent people getting addicted to the game, Sundaytoz has limited playing time to one minute per round, and users can only play five rounds in a row as they need a heart - a sort of token - to play each round, and they are only given five hearts to start with. After completing the five rounds, they must wait eight minutes to receive a new heart.

But short-tempered players have three options to win hearts without waiting. They can deliver one of a limited number of send-only hearts to a KakaoTalk contact, or invite non player to the game via the same SNS, both of which are free. Alternatively, they can buy “topaz,” which later turn into hearts; 10 topaz cost $0.99, and 750 cost $49.99.

Although the developer refuses to disclose the figure, industry insiders estimate Sundaytoz’s daily revenue from topaz sales at above 250 million won.

As users can send hearts to anyone on their KakaoTalk account, this has led to some amusing episodes being recounted on cyberspace, such as the story of the woman who had a fight with her husband after he received a heart from a strange woman in the middle of the night.

“We are considering this but it may be a while yet. We want to focus on domestic users first,” he added.