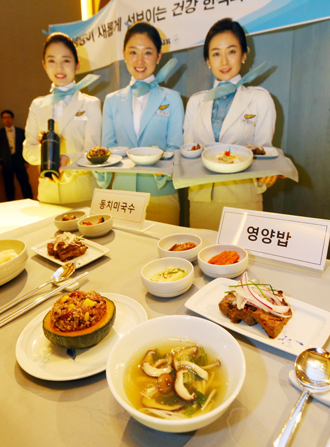 The new additions include “dongchimi guksu,” or cold noodle soup made with radish kimchi, and “steamed nutrition rice” made using chestnuts, pine nuts and sweet rice.

“The new dishes can give Korean passengers a taste of home while introducing excellent Korean food to foreigners,” said Cho Hyun-ah, Korean Air’s executive director, during a press conference at the Hyatt Regency Incheon Hotel yesterday.

“We have selected dongchimi guksu as our new main dish as traditional Korean cuisine is no longer easily accessible in Korea these days,” Cho added.

The airline said the international appeal of K-pop has whetted appetites for Korean food, adding that it was encouraged to add more dishes after receiving positive feedback in response to its introduction of bibimbap, or rice mixed with vegetables.

It subsequently added other dishes such as rice porridge; bibimguksu, or noodles with vegetables and red pepper sauce; beef ribs; and boiled chicken and rice.

The airline will serve the two new dishes from Nov. 1 to first class passengers on long-distance flights to Europe and the Americas. It said dongchimi guksu can help with digestion over long-haul flights due to its ingredients.

“We spent three months undergoing research and tests with professionals to maintain the original taste of dongchimi soup, which varies easily depending on the length of fermentation,” said Cho, adding that the steamed rice used is more nutritious than regular rice and will be served in pumpkins instead of bowls.

Korean Air also said it will expand a popular and high-quality red wine that has been served to first class passengers on routes to New York, Los Angeles and Washington since September to three more U.S. routes from June.