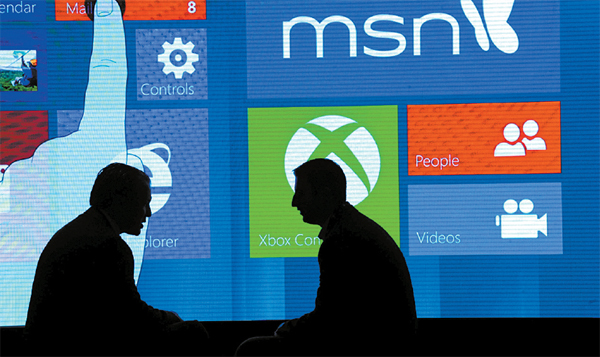 Attendees are shown in front of a Microsoft digital display during Advertising Week on Oct. 2 in New York. [AP/YONHAP]


Microsoft Chief Executive Steve Ballmer has signaled a new direction for the world’s largest software company, pointing to hardware and online services as its future, taking a page from long-time rival Apple.

Ballmer’s comments in his annual letter to shareholders published on Tuesday suggested that Microsoft may eventually make its own phones to build on its forthcoming Surface tablet PC and market-leading Xbox gaming console.

“There will be times when we build specific devices for specific purposes, as we have chosen to do with Xbox and the recently announced Microsoft Surface,” wrote Ballmer.

Ballmer, who took over as CEO from co-founder Bill Gates in 2000, said the company would continue to work with its traditional hardware partners, such as Dell, Samsung and HTC, but he made it clear that Microsoft’s role in the so-called ecosystem was changing.

“It impacts how we run the company, how we develop new experiences, and how we take products to market for both consumers and businesses,” he wrote.

Microsoft already makes money from providing services online, such as access to servers to enable cloud computing, or Web versions of its Office applications, but Ballmer’s new emphasis suggests an acceleration away from its traditional business model of selling installed software.

“This is a significant shift, both in what we do and how we see ourselves - as a devices and services company,” he added.

Alongside the shareholders’ letter, Microsoft’s annual proxy filing, which deals with the shareholders’ meeting and other governance issues, showed that Ballmer, 56, got a lower bonus than he did last year, partly for flat sales of Windows and his failure to ensure that the company provided a choice of browser to some European customers.

He earned a bonus of $620,000 for Microsoft’s 2012 fiscal year, which ended in June, down 9 percent from the year before, according to documents filed on Tuesday with the U.S. Securities and Exchange Commission.

His salary, which is low by U.S. standards for chief executives, remained essentially flat at $685,000.

It is the third year in a row that Ballmer has not earned his maximum bonus, set at twice his salary.

Microsoft’s recent financial year was scarred by a $6.2 billion write-down for a failed acquisition and lower profit from its flagship Windows system as computer sales stood still.

In the company’s filing, Microsoft’s compensation committee said it took into account a 3 percent decline in Windows sales over the year, as well as “the Windows division failure to provide a browser choice screen on certain Windows PCs in Europe as required by its 2009 commitment with the European Commission.”

Microsoft’s failure to provide a browser choice in Europe was an embarrassing setback for the company, which has been embroiled in disputes with European regulators for more than a decade and paid more than $1 billion in fines for including its own Internet Explorer browser on Windows. It now faces further fines from a new investigation.

Separately, Microsoft said that independent lead director Reed Hastings, the CEO of online video rental company Netflix, would not seek reelection at the shareholder meeting in November. A new lead director will be chosen at the meeting, Microsoft said. Hastings, 51, said he wanted to focus on Netflix and his education work.