Rivalry heats up between Ahn and Moon campaigns

Rivalry heats up between Ahn and Moon campaigns 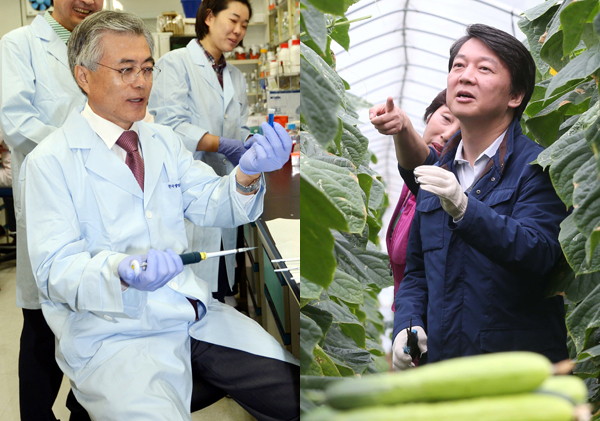 
Competition between the two main opposition candidates for president deepened yesterday when the campaign of independent Ahn Cheol-soo shot down the idea of creating a liberal coalition government proposed by his Democratic United Party rival, Moon Jae-in.

Moon and Ahn are expected to negotiate who will be the single liberal candidate for president, with the other being promised the position of prime minister in a liberal government.

The DUP has stressed that an independent president with no party affiliation won’t be able to run the country. Ahn says his avoiding of existing parties is his strength among voters.

Moon said in May during the presidential primary that he was willing to create a coalition government with Ahn.

After he was elected as the DUP presidential candidate, Moon said he wanted to strengthen the power of the prime minister to ease the concentration of power in what he called an “imperial president.”

Ahn’s campaign, however, warned against that idea.

“I don’t think the law guarantees a split supervision of ministries between the president and the prime minister,” said Park Sun-sook of the Ahn campaign. 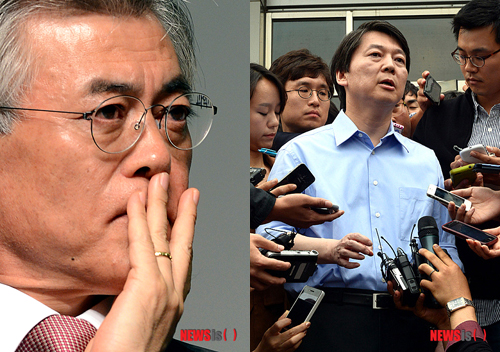 “We are in the process of freely discussing it,” Ahn said vaguely after a lecture yesterday at the Korea Advanced Institute of Science and Technology. “Nothing is decided yet,” he said.

Competition between the two candidates got more serious earlier after Ahn Tuesday recruited a lawmaker from the largest opposition party to help run his campaign.

Song was a former colleague of Moon in the liberal group Lawyers for a Democratic Society and former spokesman of Seoul Mayor Park Won-soon’s campaign in the October by-election last year. Together with former lawmakers Park Sun-sook of the DUP and Kim Sung-sik of the Saenuri Party, Song will head Ahn’s campaign.

Song said he will be a bridge between the campaigns of Ahn and Moon, and help them merge to prevent splitting the liberal vote in the December election.

“My biggest responsibility is uniting the two,” he said. “We will eventually become united.”

The DUP was shocked to lose a lawmaker. “It hurts,” Moon was quoted as saying by his spokesman.

“We have refrained from attacking Ahn politically,” Woo said. “But it’s hard for the DUP to defend Ahn’s faults.”