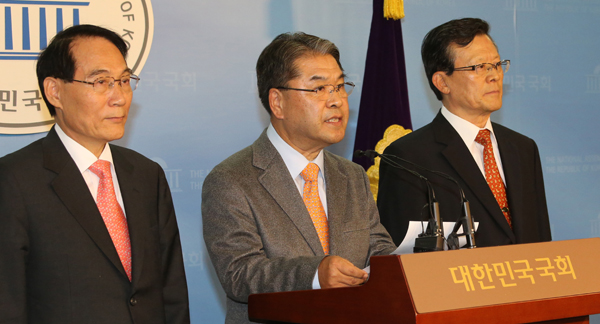 
Three officials from the Roh Moo-hyun government denied the late president offered billion of dollars in aid to North Korea during a 2007 summit, approved of nuclear weapons for the North and said he didn’t recognize the Northern Limit Line, the de facto sea border between the North and South. 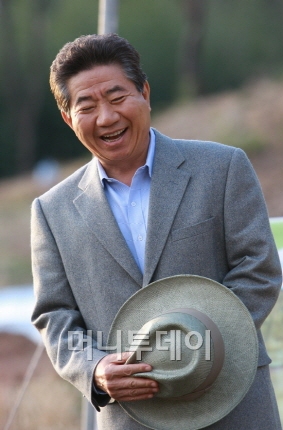 “President Roh mentioned none of the false allegations Representative Chung claimed,” they said in a joint statement. “We can’t help asking Chung why he is doing this, making ridiculous remarks as if they were the truth, and what political purposes he has.”

The Saenuri Party clearly wishes the allegations about Roh to be part of the campaign for the December presidential election.

On Monday, Gangwon-based Chung said at a parliamentary hearing that Roh had a bilateral, closed-door meeting on the sidelines of the inter-Korean summit in Pyongyang in 2007 with then-North Korean leader Kim Jong-il. It took place on Oct. 3, 2007, at 3 p.m., Chung said, at the Paekhwawon state guest house.

In the meeting, according to Chung, Roh said he didn’t recognize the Northern Limit Line as an effective boundary between the two countries, and rather described it as “a line unilaterally drawn by the United States which wanted to conquer more territory.” North Korea has never recognized the NLL.

Chung said Roh promised Kim 100 trillion won ($90 billion) of food aid, agreed to North Korea having nuclear weapons and also agreed that U.S. forces in the South must leave Korea. Chung said a transcript exists of the one-on-one, secret dialogue because the conversation was recorded and North Korean officials shared the record with their South Korean counterparts.

The three former officials said yesterday there was no one-on-one meeting between Roh and Kim, no behind-the-scenes deal and no transcript.

“The meeting that Representative Chung mentioned was held at 3 p.m. on Oct. 3 to discuss details on inter-Korean joint business plans,” they said in a joint statement. “The meeting was held with the agreement of both Koreas.”

At that meeting, there was one more official accompanying Roh: Kwon O-kyu, former monetary and economy minister. Kwon didn’t attend the press conference because he was busy, according to the three former officials.

Lee Hahn-koo, floor leader of the Saenuri Party, said at a press meeting yesterday that the Roh administration obviously “abandoned South Korea’s sovereignty” and “a parliamentary audit is needed.” Lee Cheol-woo, a ruling party spokesman, said it was “humiliating” to promise such large amounts of aid to the North and demanded the truth from Moon Jae-in, the presidential candidate of the Democratic United Party.

“When Roh made such an unconditional offer, Moon was the presidential chief of staff,” Lee said. “So Representative Moon should tell us what exactly the Blue House did at the time and what the Roh administration was given from the North in return for the aid offer.”