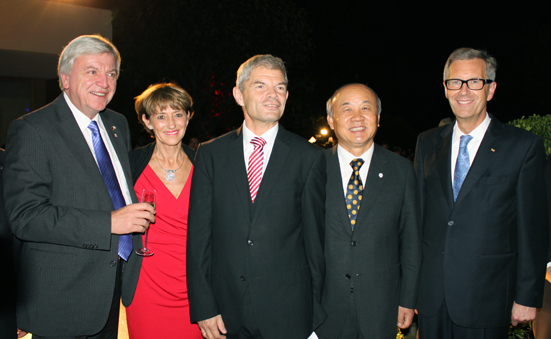 
The German Embassy in Seoul held a grand event Tuesday night with dignitaries from the country and Korea to celebrate the 22nd anniversary of German unification.

The event was hosted at the residence of German Ambassador Rolf Mafael. About 800 guests, including diplomats from around the world, senior Seoul government officials and cultural, sports and business dignitaries with ties to Germany attended the event.

Expressing his appreciation for the Korean people’s friendship, Bouffier also said he wished the Koreans would seize the same opportunity soon.

Minister Yu also talked about his vivid memory of the German unification 22 years ago. “I remember it as the most dramatic moment in the 20th century,” he said. “I was an eyewitness to the fall of the [Berlin] wall and now I am the unification minister of the world’s only divided country.”

Yu said the international community had serious concerns about a unified Germany due to the high costs of reunification and social chaos to accompany the process, but Germany rose as a leader of the world order and leads efforts to resolve the European economic crisis.

“German unification is a source of hope for Korea,” Yu said. “We’ve learned a lesson that well-prepared unification will bring about success.”

In addition, in a one-hour meeting with Minister Yu yesterday held in the ministry in central Seoul, the former German president Wulff said it is a wise strategy to raise funds ahead of any future unification, referring to Seoul’s efforts to set aside finances to be used for potential reunification.

Earlier this year, Yu launched a campaign to raise unification funds as part of the country’s preparation efforts. As a symbol of the campaign, a “Unification Jar” was launched, with important local figures, including President Lee Myung-bak, donating funds to the campaign.

Wulff said such funding efforts could raise awareness for potential unification in the minds of the younger generation.

Efforts to secure support from neighboring countries are also important to successfully reunite divided countries, the former president said, as he expressed his hopes for unification on the Korean Peninsula.

In response, Yu lauded Wulff’s efforts in integrating German society after the 1990 reunification and congratulated him on the 22nd anniversary of the Oct. 3 unification of East and West Germany.

President Lee said earlier this year that unification with the North is near and the country should prepare for the event.