Shellfish found alive in a cave after 40 million years

Shellfish found alive in a cave after 40 million years 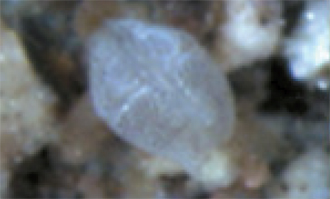 This shellfish was believed to have gone extinct 40 million years ago, but the National Institute of Biological Resources said it was found alive. [YONHAP]

A small shellfish that was believed to have gone extinct 40 million years ago was found alive in a cave in Uljin, North Gyeongsang, the National Institute of Biological Resources said Monday.

The institute, which is headed by the Ministry of Environment, confirmed the finding of the new specimen belonging to the frambocythere category, by reporting it to academic journals early this week, including the online version of the Journal of Micropalaeontology.

Previously, the ostracoda had been discovered only as a fossil from 135 million to 40 million years ago in the European region. The body of the seed-shaped ostracoda is around one millimeter (0.4 inches) long, and on the outside, there are two layers of hard shells that protect the feeble body. The specimen resembles a small clam, and it is an indicator of possible oil and gas development, because the fossils are often found near oil.

It was actually 10 years ago that Choi Yong-geun, head of the Yeongwol Cave Eco-Museum, collected the specimen from a preserved area inside the Seongryu Cave in Uljin. But at the time, he wasn’t aware of what he found.

Prof. Chang Cheon-young of Daegu University found the specimen unique, and after receiving consultation from a team of English experts on paleontology, he was able to find and confirm it was a new specimen in May of last year. The announcement of the confirmation was made this week.

“Late last year, I visited the cave where the specimen was first found and collected an additional 30 of them,” Chang said.