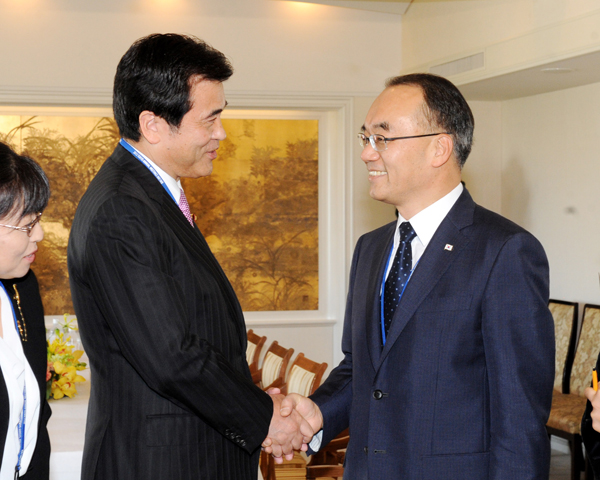 Japanese Finance Minister Koriki Jojima, left, and Korean Finance Minister Bahk Jae-wan hold a meeting in Tokyo yesterday. It took place when tensions between the two countries are at boiling point due to a territorial dispute. [YONHAP]


TOKYO - Korea and Japan shared the view that they have to increase cooperation in economic and other areas, Seoul’s finance minister said yesterday, suggesting they may be ready to improve recently-strained relations.

Finance Minister Bahk Jae-wan is now in Tokyo to attend the annual meeting of the International Monetary Fund and the World Bank.

He met earlier with his Japanese counterpart Koriki Jojima on the sidelines of the gathering.

“We shared the view that it is necessary to step up cooperation in exchanges of human resources, culture, sports and the economy, especially at a time when bilateral relations are strained,” Bahk told reporters.

He said they agreed that each country benefits from the other having a stronger economy that is better positioned to snap up its exports.

The bilateral meeting was held against the backdrop of heightened diplomatic tensions following President Lee Myung-bak’s unprecedented visit to the easternmost islets of Dokdo in mid-August.

Korea regained independence after Japan’s 1910-45 colonial rule and reclaimed sovereignty over its territory.

Japan’s territorial claim to the Dokdo islets, known as Takeshima in Japan, is viewed by Koreans as a sign that Tokyo has not fully repented for its imperialist past.

Fallout from the Dokdo visit was not confined to diplomatic ties. The two countries canceled their annual finance ministers’ meeting and Tokyo threatened to consider adjusting the terms of a currency swap deal with Korea.

On Tuesday, they announced in a joint statement that they will scale back the size of the deal from $70 billion to $13 billion later this month, but noted that the decision was based purely on economic considerations.

The Korean government in a statement said as the financial market is stable and there is a sufficient amount of foreign reserve the impact from the maturing swap will be limited. Bahk said neither raised the currency swap issue during their meeting.

For the annual finance ministers’ meeting, which was put on hold indefinitely, Bahk said they agreed to hold the meeting in Seoul “at an appropriate time in the future.”