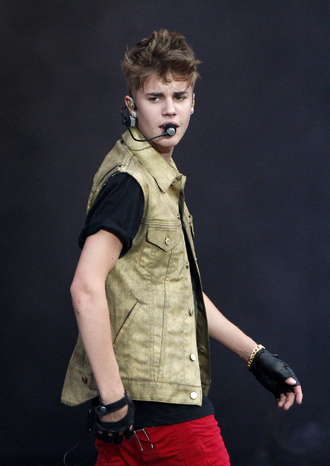 The video released Wednesday by a New York prosecutor is part of a plea deal settling misdemeanor charges filed after a mall fan frenzy in 2009.

The manager and executive were arrested after police ordered a Bieber autograph session at a clothing store shut down over fears someone could get hurt. More than 3,000 teens and younger girls had arrived by 1 p.m. for an event scheduled for 4 p.m., leading to the cancellation.

Bieber never appeared, but police said at one point while they were trying to disperse the crowd they were hindered by a message from Bieber’s Twitter account: “On my way to Roosevelt Field Mall in Long Island, NY, to sign and meet fans! I’m pumped. See u there.”

Prosecutors said police had asked Bieber’s staff to send a tweet from his account to notify fans that the event was canceled. Though they tried, Island Def Jam Record Music Group employees were unable to tweet on Bieber’s account because the singer’s manager, Scott Braun, had changed the account’s password.

About 90 minutes after the police made their initial request, they said Braun sent two tweets canceling the event, and the crowd dispersed within 15 minutes, prosecutors said.

Braun and Def Jam Records executive James Roppo were charged with misdemeanors. The charges were later dropped in a plea agreement that permitted Bieber’s record company and a management company to plead guilty to fire code violations, as well as reimburse Nassau County almost $8,000.