Ridin’ solo in Seoul has never been so trendy

Ridin’ solo in Seoul has never been so trendy 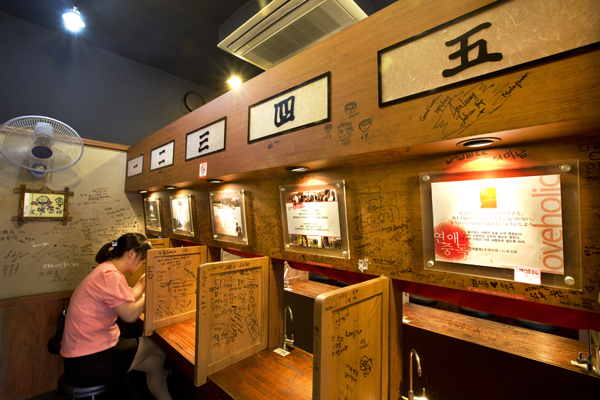 Ichimen, a Japanese-style ramen restaurant in Sinchon, western Seoul, provides single wooden cubicles for those dining alone, joining a growing legion of establishments opening their arms to those heading out solo. Provided by Park Sang-moon


On the outside, Ichimen, a Japanese-style noodle shop in Sinchon, western Seoul, is nothing more than a typical ramen restaurant. But on the inside, it resembles a library more than a place to have dinner.

There’s no table chatter because the noodle shop is carved into individual wooden cubicles, a far cry from the boisterous Korean barbecue joints that seat tables of four or more. In Ichimen, the only sounds you can hear are the frequent slurps and occasional calls for assistance.

The noodle shop joins a growing legion of solo-friendly establishments sprouting up as more and more people openly enjoy their own company and brush off the stigma that has been attached to dining alone.

This is a major shift in Korea, where eating and working with groups of friends and colleagues is seen as an extension of family life, a notion that largely stems from Confucianism.

“I prefer eating alone because I can do what I want while eating,” says Kim Min-ji, a 22-year-old university student who ate champon, or Nagasaki-style ramen, at Ichimen while wearing headphones.

“I enjoy listening to music when I eat. But I am discouraged from doing so when I have company,” she says.

Restaurant owner Lee Myung-jae, 35, caught on to the demand for these types of restaurants.

“When I first started running the solo-friendly ramen business four years ago, people said that it wouldn’t attract many customers because many consider dining an inherently social activity,” Lee says.

His business didn’t take off immediately as the vast majority of people were initially still uncomfortable eating out alone. But once it caught on, it boomed.

“The success of my ramen shop with solo diners is pretty recent and we have built a very strong base of loyal customers. Thanks to that, I now make around 1.7 million won ($1,530) a day and plan to launch a franchise,” Lee says.

Ichimen isn’t the only restaurant catering to lone diners. Rather than casting disapproving looks and fretting over paltry one-person bills, a slew of businesses are opening their arms.

Pakumori, a curry shop in northern Seoul, offers CD players and headphones for those who come in alone. The items hang on a wall at the corner of the bar.

“I’ve seen many more single diners than I expected. So I put a bar in the corner and allowed them to listen to music through the CD players,” says Ahn Seung-eob, the restaurant owner.

“I don’t want them to be seen as outcasts or out on the prowl,” Ahn adds.

There are even exclusive and strict restaurants that limit the party size in an effort to better serve those riding solo. Visitors are greeted with a sign in front of Jigudang, a restaurant near Seoul National University in the southern skirts of Seoul, that reads, “We don’t accept a group of more than three people because there are a lot of lone diners coming and they want to enjoy their meals in quiet, calm surroundings.”

Even if a couple manages to obtain permission to get into the restaurant, they will be bombarded with warning cards posted on the walls that say, “Please don’t speak aloud, the noise makes other diners uncomfortable.”

Lee Sang-heon, head of IcanBiz, which offers consulting services on restaurant franchises, noted in a weekly report that the wider trend is bringing lone restaurant-goers into the dining scene by adding bars or building booths. The tendency is also reflected in university cafeterias and franchised cafes such as Starbucks and Caffe Bene, which are increasingly adopting bars and small tables.

“Some owners even make their way to Japan, which is home to restaurants exclusively catering to single customers,” said Kang Byung-hoon, representative of the consulting firm.

Kim Jae-hoon regularly takes business trips to Osaka in Japan and actually adopted a business model that originated in the city to his franchise Arigato Mamma.

“I modified the interior design that I saw in Osaka and also acquired the idea of offering take-out services for those who feel uncomfortable eating alone in the store,” Kim says.

The trend is not limited to Japanese-style ramen and beef bowls. Also available are foods that have traditionally been reserved for communal dining.

Gogichon Plus Bar in Sinchon set up single small grills made of stones and lets solo diners sear pork and beef at a bar while Hana Shabu Jung, a shabu-shabu restaurant in southern Seoul, prepares single pots for those coming alone. Their services are especially welcomed by solo customers as most beef and Japanese hot pot restaurants indirectly press customers to order at least two servings. 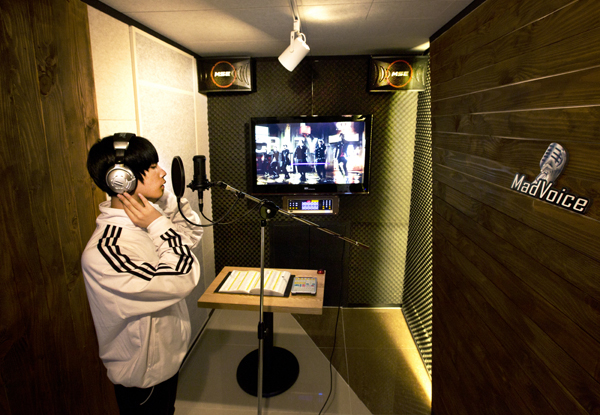 Mad Voice exclusively caters to those heading to noraebangs, or karaoke rooms, by themselves.


The less the merrier

After grabbing dinner, the night no longer has to end alone on the couch watching a “Friends” rerun. Noraebangs, or karaoke rooms, are devoting rooms to those who want to sing alone. It may seem like a crazy idea to those who see noraebangs as a place to sing with friends or act belligerently, but the trend is catching on.

Mad Voice, a single-person noraebang in Hongdae, western Seoul, challenges the image of singing rooms in Korea. In front of the one-person room is a sign that reads, “Only for You.” The hallway is lined with individual booths. Eight rooms out of the 13 were occupied and the patrons all sang with intensity.

As was the case with the restaurants, this type of singing lounge was first developed in Japan.

“I didn’t expect it to take off because Korea doesn’t have a strong base for that kind of culture. But I sensed something different has happened. Quite recently, people have become less self-conscious when going out alone,” Jang says.

“If you go to any big cafe like Starbucks you can see lots of people enjoying time on their own. That’s how I figured out there were those willing to come sing karaoke and enjoy it by themselves.”

The age of customers varies, but the average customer is in his or her 20s due to the proximity to the universities. However, a number of office workers also make up a significant portion of customers at night.

“I come here to get rid of stress. I sometimes go to karaoke rooms with people from my company, but it only adds more stress. I can’t sing as much as I can because my boss sings most of the time,” says Kim Su-wan, 28, who came to Mad Voice after work at around 9.

“I feel constraint and pressure to sing only upbeat songs to lift the atmosphere,” he says.Worn-out Korean students - notorious for their intense studying habits - also make up a loyal clientele.

“I am preparing for the civic service exam and usually study for more than eight hours a day. Sometimes, it is really hard to carry on. So I visit here to rejuvenate myself,” says Kwon Seo-young, a 24-year-old university student.

“I come here because I want to spend time on my own. If I meet with others, they keep asking how my studies are going and I might feel guilty for singing songs,” she says.

Movie theaters, which have long been dominated by lovey-dovey couples, are seeing an influx of solo moviegoers.

According to Maxmovie, a Web site for online movie ticket booking, the proportion of those who buy only one ticket has constantly increased since 2002. During the first half of 2012, solitary moviegoers accounted for 16 percent of sales, a sharp increase from 5 percent in 2002.

“I like to have as few distractions as possible because I don’t want to have to constantly make sure the other person is having a good time or enjoying the movie,” says Choi Joon-il, 32, who came alone to the CGV in Gangnam District, southern Seoul, in order to watch “Gwanghae.”

“There are certain types of movies that I have such an intimate connection with that I don’t want to share that experience with anyone - there are movie experiences that I treasure to be mine and mine alone,” Choi adds.

Some become lone moviegoers because it can be more convenient.

“I often watch movies alone because I don’t need to arrange a schedule with my friends. I work at a restaurant that’s open on the weekends, so I have extra time during weekdays. But my friends are all ordinary workers who can’t easily find the spare time during the week day,” says Lee Jong-seob.

Some observers link the trend with the modernization of Korea and accompanying sense of individualism.

“If a country becomes affluent and developed, there is more emphasis on self-realization, which leads many to shrug off conventional social norms,” says Lee Jang-young, a sociology professor at Kookmin University.

Others point out that Korea no longer bears a single value that used to hold people together, prompting them to seek their own ways of life.

“As Korea has rapidly developed and modernized, traditional values such as the importance of community and companionship have lost ground. There is no alternative social notion to replace them,” says Chun Sang-chin, a sociology professor at Sogang University.

Older people may need to take some time to come to terms with this shifting trend as they are more accustomed to an environment that emphasizes conformity to group membership.

“It is hard to imagine eating alone back in my university years. Seniors would gather freshmen and take them to popular restaurants near the college,” says Kim Kyung-soon, 49.

“But I hear now it is not that uncommon to eat alone and many university students are so busy with their studies preparing for a job that they don’t attend any school events.”