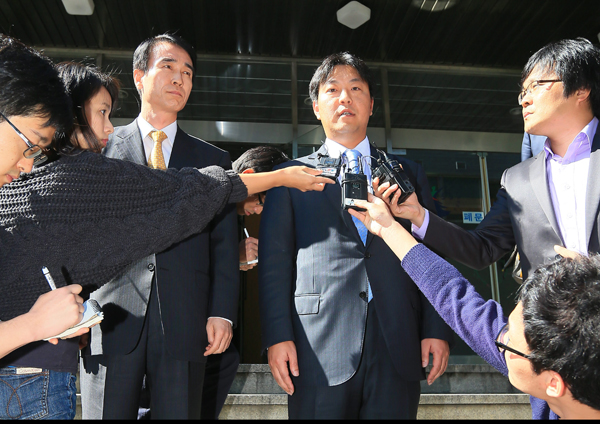 
After much controversy, the court yesterday appointed Shin Gwang-soo, CEO of Woongjin Holdings, as the manager in charge of overseeing the company’s debt restructuring program.

“I accept the heavy responsibility that has been handed to me by the court, and I’ll do my best to smoothly administer the recovery in cooperation with creditors,” Shin said after the Seoul Central District Court’s decision was announced.

Market insiders believe the court hopes to see the company graduate from the program in the first half of next year.

Shin’s appointment comes with several conditions attached: the creditors’ association must be allowed to oversee the restructuring; Woongjin Group, including its founder and chairman Yoon Seok-keum, is blocked from using its influence to affect the process; and the controversial sale of Woongjin Coway, the group’s water-purifying business, must be resolved quickly.

If these conditions are not met, the court could name a third person to take over the management position. Additionally, if the restoration plan falters, the court is fully empowered to declare the holding company bankrupt. Woongjin Holdings filed for the program late last month.

Yoon may have been appointed but for the strong opposition of creditors, who argued that all Woongjin Group executives should be barred from overseeing the program as it was largely their poor management that caused the mess in the first placed.

Although Yoon listed his name as co-CEO of the holding company before filing for court receivership in hope of being picked, he was forced to withdraw and to step down as CEO of the group in the wake of the outcry.

At a press conference on Oct. 5 held at the group’s headquarters in Seoul, he apologized to the public and creditors for letting the situation deteriorate to such an extent.

“Although I experienced numerous ups and downs in managing the company for 32 years, I was confident of continuous growth,” he said, blaming his “vanity” for the debacle as he could have cut his losses earlier when it became apparent he was fighting a losing battle after making excessive investments in the construction and solar energy businesses.

While his appeal failed to appease most of the creditors, the court still moved to appoint Shin in his place. This conforms to a trend that began in 2006 of it naming insiders to help turnaround debt-ridden companies due to their in-depth knowledge and understanding of the corporation’s affairs.

Exceptions include cases where one of the company’s top executives have been found guilty of illegal business practices, such as taking it to the brink of bankruptcy by concealing wealth.

Now attention is fastening on the sale of the group’s water-purifying business, which was expected to generate cash to help cover the debts that the conglomerate owes to its creditors. Instead, the sale fell apart at the last minute. However, local private equity fund MBK Partners, which was supposed to buy the company for 1.2 trillion won ($1.077 billion), said it is still interested in the takeover.

But suspicion is rising that the group may now be unwilling to part ways with the subsidiary, which has been its top cash cow of late. Selling this could land it in deeper water later on, which is why some believe it’s no coincidence the holding company filed for court receivership just a few days before the fire sale was set to take place.

Shin formerly worked at Hansol Group’s business management and planning department and Boston Consulting Group before joining Woongjin as an assistant executive in 2006. He has been CEO of the holding company since 2010.