Moon challenges rivals to take on chaebol together

Moon challenges rivals to take on chaebol together 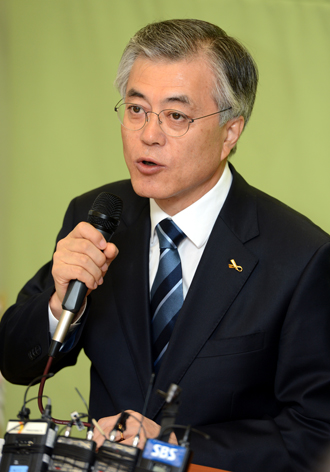 Moon Jae-in, presidential candidate of the opposition Democratic United Party, yesterday proposed that he and his two rivals come up with common positions on reforming Korea’s chaebol, or conglomerates.

The former chief of staff of the Roh Moo-hyun Blue House hosted a town hall meeting at the Korea Federation of Small and Medium Business and talked about his “economic democratization” road map.

The focus of his platform is reforming the ownership structures and unfair practices of Korea’s largest business groups.

After admitting the Roh government’s failure to reform the conglomerates, Moon proposed a three-way meeting with the Saenuri Party’s presidential candidate, Park Geun-hye, and liberal independent Ahn Cheol-soo to talk about ways to realize a so-called economic democracy.

The Park campaign yesterday sneered at the proposal, saying it saw no need to consult with an independent candidate with no party-based support in the legislature, referring to Ahn.

“One of the presidential candidates doesn’t even have representation in the legislature, so there is no need for the meeting,” said Kim Chong-in, architect of the Park campaign’s economic democratization policies. “We just need an agreement between the Saenuri Party and the DUP.”

In the 300-seat National Assembly, the Saenuri Party controls 149 seats, while the DUP controls 127. Ahn’s campaign actually has the support of a single incumbent lawmaker who defected from the DUP earlier this week.

A group of lawmakers in the conservative ruling party came up with a series of conglomerate reform bills in August and September that are similar to proposals of the DUP. While the DUP has officially included them in its platform, a debate continues in the Saenuri Party on how far it wants to go with reforms for large business groups.

While Park agrees with banning any new cross-shareholdings among conglomerates and their subsidiaries, she is reluctant to enforce such a ban retrospectively. She has also yet to come up with positions on other issues.

Moon presented yesterday a road map to reform the ownership structure of the powerful conglomerates. The plans include a ban on the cross equity investment of conglomerates. Moon said new cross-shareholdings should be banned while existing ones should be withdrawn over a three-year grace period. Companies that resist the ban will face fines.

Cross-shareholdings have been criticized for allowing tycoons to control business groups while owning only small stakes in them. He also proposed a stronger separation of financial and industrial capital. He wants conglomerates to own no more than 4 percent stakes in commercial banks, a change from the current 9 percent level. He also promised to withdraw tax cuts for the richer class and increase the tax rate on capital gains.

The business community reacted negatively to the DUP nominee’s proposal. “Most of the bills that are proposed in reforming the conglomerate do not benefit either business or the public,” said Lee Cheol-haeng at the Federation of Korean Industries.