A former Constitutional Court chief justice and a renowned female CEO of a fashion house were recruited yesterday to be two of the four co-chairs of the presidential campaign of the Saenuri Party’s Park Geun-hye in a symbolic move to highlight her vision of “Grand National Unity.” 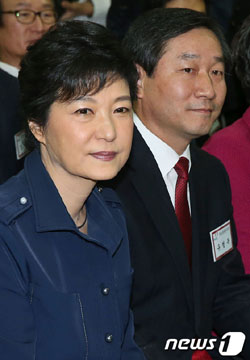 Park held a press conference yesterday to announce her central campaign committee. The co-chairmen were Kim Yong-joon, a 74-year-old lawyer who headed the Constitutional Court from 1994 to 2000, and Kim Sung-joo, CEO of Sungjoo Group and the luxury fashion brand MCM Holdings AG. Park also named two senior Saenuri politicians as co-chairs: Chung Mong-joon, former chairman of the party and a known critic of Park, and Hwang Woo-yea, the current chairman.

The campaign’s theme of promoting unity is symbolized by the appointments of a champion of the Constitution, a businesswoman and a former political rival of Park. Park said she will personally head the campaign’s Grand National Unity committee and appointed Han Gwang-ok, a political heavyweight in the Jeolla region and a loyalist of former President Kim Dae-jung, as its senior vice chairman.

Park also said she will personally oversee a committee that makes campaign pledges. “In order to responsibly realize the promises to the people, I will personally head the pledge committee and follow up on every single one of them,” Park said. 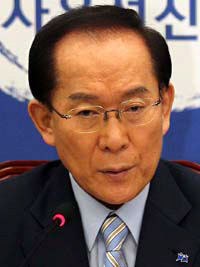 “The recruitment of Chief Justice Kim [Yong-joon] demonstrates my intention to realize the constitutional values and respect our party’s vision, principles and the rule of law,” Park said. “And I was inspired by Chairwoman Kim [Sung-joo]’s global insights and her strong belief that the country should be developed through women’s active participation,” she added.

Park’s recruiting of Chung Mong-joon, who has been critical of her in the past, symbolizes internal party reconciliation. She continued to appeal to Representative Lee Jae-oh, a political rival, to join the campaign. “I have contacted him many times,” Park said. “I will continue to approach him.”

The formation of the campaign team showed how Park got over some major bumps of the last week. Representative Lee Hahn-koo, floor leader of the Saenuri Party, was not included in the list of senior campaign officials. Key strategist Kim Chong-in, architect of Park’s “economic democratization” campaign, protested Lee’s pushback on policies that were tough on the chaebol, or conglomerates.

Park’s decision to head the Grand National Unity personally while appointing Han as her deputy accommodated a demand of Ahn Dae-hee, head of the special committee on political reform.