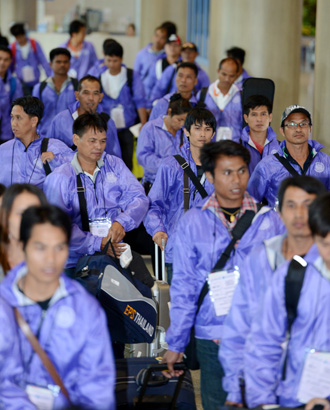 The first batch of 131 foreign workers with re-employment permits re-enter Korea yesterday in accordance with a revised law that took effect in July. The revised law allows “exemplary” foreign manual workers who have not left their designated workplaces for a certain period of time to be re-employed by the same employers three months after leaving the country. Of 2,746 foreign workers who received re-employment permits between July and Sept. 18, 1,027 left for their countries, the ministry said. Some 400-500 are expected to return to Korea every month. [NEWSIS]