Fat get fatter as skinny get skinnier

Fat get fatter as skinny get skinnier 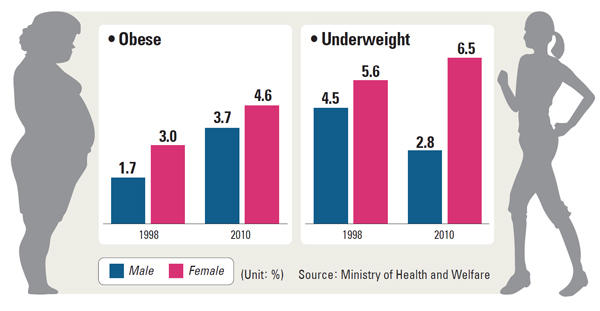 The obese are becoming more obese and the thin are getting thinner, found a government study of the change in weight in Korean society over the past decade.

A 165-centimeter (5-foot-5-inch) tall 38-year-old office worker surnamed Lee recently checked himself into a hospital because of a weight problem.

“I started gaining weight since middle school because I enjoyed ramen and hamburgers too much,” admitted Lee, who currently weighs 100 kilograms (220 pounds). “Even if I want to lose weight, I can’t.” He said he has difficulty getting around and snores heavily at night. He decided to get gastric bypass surgery to reduce his intake of food.

On the other hand, a 27-year-old young woman, currently a graduate student, takes out her smartphone every meal to count each calorie she consumes that day. At 157 centimeters tall, she weights 44 kilograms. She has a strict daily exercise regiment as well to maintain her current weight.

“Though many people around me tell me I am too skinny, I like the way I am right now so I don’t care what they say,” she said.

Flipping through the channels, on any music program or drama series you see mannequin-thin singers and actresses, the current standard of beauty.

So it comes as no surprise that over the past 12 years, the percentage of underweight women in their 20s increased from 12.4 percent in 1998 to 17.8 percent in 2010, the Ministry of Health and Welfare revealed Wednesday. The underweight rate of women in their 30s also doubled from 4.1 percent to 8.3 percent.

But the total percentage of the underweight population went down from 5.1 percent to 4.7 percent between 1998 and 2010 because the number of underweight men decreased by nearly half.

The ministry’s analysis of weight change in Korean society between 1998 and 2010, which used data from the 2011 National Health and Nutrition Survey, came ahead of the 3rd annual Obesity Prevention Day, which began yesterday.

Over a decade, however, while the overall overweight rate remained consistent at around three in 10 people, those classified as clinically obese nearly doubled from 2.4 percent to 4.2 percent.

Overweight people are those who have a body mass index, a measure of body fat based on height corresponding to weight, within a 25 to 30 range. Those who have a BMI of over 30 are classified as obese. The range for normal weight is between 18.5 to 25 and those with a BMI of under 18.5 are underweight.

The OECD stated in a 2012 report that in 19 of 34 OECD countries, the majority of the population is overweight or obese. Countries like Japan and Korea score on the lower end, while the United States and Mexico have an obesity rate higher than 30 percent.

“Those in their 20s and 30s are the generation that acquired a taste for Western fast-foods such as hamburgers and pizza since they were young,” said Dr. Oh Sang-woo of Dongguk University Ilsan Hospital. “You have to manage your weight from adolescence in order to prevent adulthood obesity.”

Dr. Woo also said that the high number of underweight females can be attributed to “young women’s extreme obsession with not getting overweight and dieting” which in turn can lead to osteoporosis. On the other hand, he said obesity can be attributed to excessive calorie intake, a sedentary lifestyle, smoking and drinking.

He said that those who have eaten cheap fast-food and ramen since they were young, and those who come from low-income households, are particularly more vulnerable to becoming obese as adults.

“Even if the overall overweight rate is the same, that there is extreme polarization on both ends is a warning sign about public health,” he added. “Spreading awareness of adequate weight management and lifestyle habits has to be actively promoted.”

The Health Ministry will provide body fat analyzer tests and diagnoses for a week in health and community centers, along with counseling to spread awareness on carrying out healthier lifestyles, diets and exercise habits.