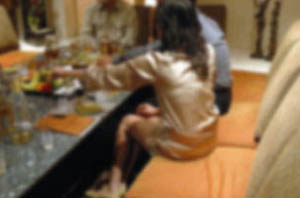 Police busted a human trafficking ring in which Korean women were lured to Hawaii with the promise of lucrative jobs but instead ended up working as hostesses and were forced into prostitution.

The Gyeonggi Provincial Police Agency said yesterday they filed an arrest warrant against a broker surnamed Yu on charges of smuggling female job seekers to the U.S. They also booked his sister, who runs a bar in Honolulu and another broker surnamed Park, who managed illegal entry of the victims to the islands, without detention on the same charges.

Investigators also identified six other accomplices and placed them on a wanted list. The accused accomplices are bar owners and brokers in Hawaii. The police said they appealed to Interpol and the U.S. Department of Homeland Security for cooperation.

“The brokers lured the women by posting job advertisements on Internet portal sites, saying they could arrange jobs in the U.S. that would pay them over 5 million won ($4,485) a month working as restaurant or bar servers,” said Kim Dong-in, head of the violent crime section at the police agency.

So far, the police have found five women who took the bait.

“Two of the five victims worked at entertainment establishments in Korea as noraebang doumi, helpers in karaokes who drink and sing with customers, before being tricked by Yu. He lured them by promising them they could make more money in the U.S. as regular servers at restaurants or pubs,” according to police.

The police said Yu and Park received 20 million won from bar owners in Hawaii for each woman they delivered. Indebted with 20 million won upon the arrival, the victims were coerced for sexual service by bar managers and their passports were confiscated.

“We believe there are more victims who have been deceived by the brokers and fallen into sex trafficking and are set to extend the investigation,” said Kim.