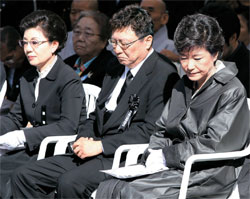 Prosecutors said Wednesday they have asked for a summary judgement in the fraud case involving the younger sister of the ruling Saenuri Party's presidential candidate Park Geun-hye, seeking a fine of 3 million won (US$2,692).

Park Geun-ryong, along with two others, allegedly pocketed 70 million won in down payment by falsely promising to lease a parking lot to several victims in September last year, prosecutors said. The three are suspected of receiving another 23 million won from the victims one month later. (Yonhap)