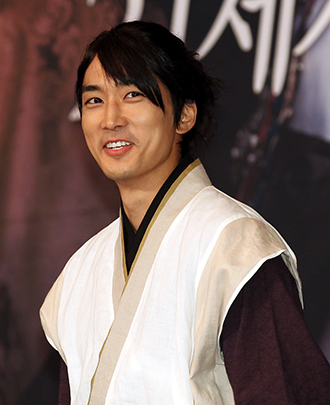 Song Seung-hun has been cast in a period action film tentatively titled “Messenger.”

Storms Company announced yesterday that Song will play a messenger named Moo-jin during the Joseon Dynasty who must relay a message that will shape the course of history.

Song’s agency said the 36-year-old actor is practicing horseback riding and fencing for the film, although production will not start until December.

The Hallyu star said he was counting the days until filming begins.

“I honestly got through the whole screenplay in one sitting,” said Song. “I liked the action in it, and Moo-jin is such an incredible character.”

Meanwhile, a wax figure of the star is scheduled to be unveiled in December at the Madame Tussauds in Busan.

“We expect Hallyu fans will love it. We could really not think of any star better looking or better suited to turn into a wax doll,” said a spokesperson for the museum.
By Carla Sunwoo