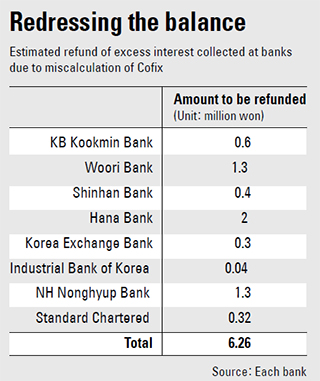 The Korea Federation of Banks Chairman Bahk Byong-won said there is an agreement among banks that prevents them from revising and republishing an erroneous cost of fund index (Cofix) until all banks agree.

The federation was accused this week of trying to cover up a miscalculation of the August Cofix. On Monday evening, it revised the August Cofix down 0.03 percentage points to 3.18 percent from 3.21 percent for new loans, 11 days after it discovered an error on Sept. 27.

It revised interest rates for outstanding loan to 3.78 percent from 3.79 percent.

This is the first time the Cofix rate was revised since it was first introduced in the market in 2010. 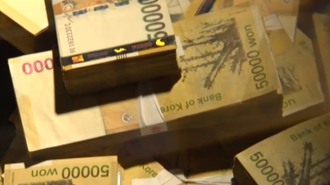 “Foreign countries don’t revise benchmark rates if an error is found after publishing them,” Bahk said in a press conference in Tokyo on Thursday while attending the International Monetary Fund and the World Bank annual conferences. “We have adopted a similar model after the treaty of Federal Home Loan Bank of San Francisco’s Monthly Weighted Average Cost of Funds Index (COFI).”

Bahk said the COFI regulation states it “will not revise or republish any COFI for any reason after the publication date.”

“The agreement kept us from swiftly revising the Cofix although we discovered an error,” he said. “This is because to make changes in an already published Cofix rate we had to seek agreement from all nine local banks that are in charge of submitting their own Cofix rate to the federation. The federation had no intention to cover up the miscalculation.”

The Cofix, which is widely used as a benchmark for bank lending rates, is calculated by averaging the interest rates of bank debentures, certificates of deposit, fixed deposits and installment savings plans by nine local banks. The federation issues the Cofix at 3 p.m. on every 15th business day of the month.

The federation belatedly revised the August Cofix rate Monday evening after it discovered that a Woori Bank employee provided wrong figures, which raised the overall average of the Cofix rate issued by the federation. That led banks to charging higher lending rates to borrowers.

The Financial Services Commission said on Monday it will come up with countermeasures to improve banks’ procedures for submitting Cofix rates to the federation to prevent similar mistakes in the future.

“We know the refund amount is tiny but an error like this could completely blow the public’s trust in the financial sector,” said an executive at a bank.