As the recession in the global shipbuilding industry enters a deeper stage, a wave of bankruptcies has engulfed the southern coast of Korea, where a number of small shipbuilders are concentrated.

According to the Financial Supervisory Service this week, 22 of 23 registered small shipbuilders are undergoing massive organizational restructuring, swamped by deficits that are mounting while orders dry up.

One of them is Ilheung Shipbuilding based in Mokpo, South Jeolla. The company is scheduled to be sold to a third party after completing court receivership. Samho Shipbuilding in Tongyeong, South Gyeongsang, already went belly up this year. 21st Century Shipbuilding, a neighboring company of Samho, is also slated to shut down soon.

Some shipbuilders are even transforming themselves into other businesses. Orient Shipyard in Busan was reinvented as a repairer of old ships after it stopped seeing new orders.

“Even though there are new orders, small shipbuilders are unable to bag them because the financial sector doesn’t issue refund guarantees [RG] for them,” said an industry insider.

Small shipbuilders have been having a painstaking time since the 2008 financial meltdown triggered by the U.S. subprime mortgage crisis. The euro zone debt crisis that followed put them in even more of a bind as it caused European clients to stop placing orders due to a lack of financial liquidity.

The riptide of bankrupt shipbuilders has also impacted machinery and material manufacturers that supply parts to them in the southern part of the country.

In Gimhae, South Gyeongsang, there are about 100 suppliers at serious risk of folding. “As many of the shipbuilders in the region are in the middle of restructuring, we have lost our customers,” said a man with the surname Kim who owns a parts maker in Busan.

The collapse of the small shipbuilders is apparently crippling at least one regional economy along the southern coast. Tongyeong, the home to five small shipbuilders, has seen its population fall by about 800 in the past year due to an exodus of laid-off employees.

Numerous diners that survived by catering to workers in the industry are also closing down, with “for lease” notices increasingly pasted on derelict premises beside shuttered shipbuilders.

“Our city that was insulated from the 1997 Asian financial crisis, owing to the peak time in the shipbuilding industry, is now facing a severe crisis,” said Ha Jae-koo, a manager at a small hotel in Tongyeong.

Shina Shipbuilding, one of three major players that propped up the local economy when times were good, has not won a single order since 2008. 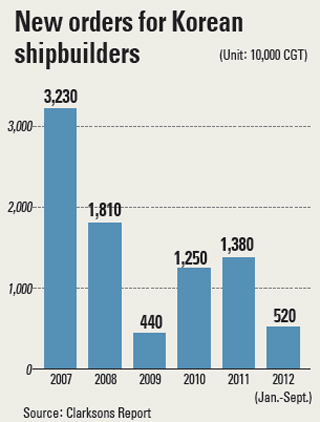 Inside the company’s shipyard, a sense of emptiness immediately overwhelms visitors. Two docks are occupied by under-construction 50,000-ton tankers, but the other two are empty. When the two vessels are finished, all four docks will be empty as there is nothing to fill the void.

Shina was placed under a workout program in 2010, when about 70 of its 100 ship orders were canceled.

A bigger headache for the shipbuilder is that seven finished ships are still sitting there waiting to be collected - and paid for - by their new owners.

European shippers are canceling their contracts, claiming insufficient funds, then getting the ships cheaper when the builder is unable to find a replacement buyer, insiders say.

“Shippers are tending to postpone picking up the ships until their prices plunge after the original contracts are canceled,” said Park Ki-jeong, a manager at the company.

Shina completed a $62 million tanker for a client in the United Arab Emirates in 2008, but the shipper abruptly canceled the contract. The Korean firm had to sell the ship for $32 million before it started to rust.

In total, 45 civil organizations teamed up to bail Shina out in January.

“Regardless of their political views, people agree that if Shina is lost, Tongyeong’s economy will suffer,” said Cho Il-cheong, one of the leaders of the coalition.