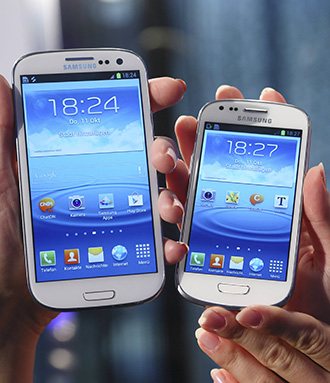 A Samsung Galaxy S3 mini, right, is displayed at its premiere in Frankfurt on Thursday. [REUTERS/YONHAP]

Separately, Samsung unveiled Thursday a smaller and cheaper version of its hugely popular Galaxy S3 smartphone with the same screen size as the iPhone 5: four inches.

The U.S. Court of Appeals for the Federal Circuit overturned an injunction issued by a judge in California for the Galaxy Nexus as part of a lengthy patent case, saying the lower court “abused its discretion.” 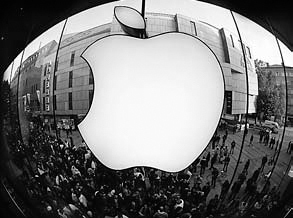 She ordered the temporary ban saying that Apple “has shown a likelihood of establishing both infringement and validity” of its patents related to the iPhone’s Siri virtual assistant software.

But the appeals court said Apple must show not only that it would suffer “irreparable harm” but “establish that the harm is sufficiently related to the infringement.”

“In other words, it may very well be that the accused product would sell almost as well without incorporating the patented feature,” the court said in an 18-page opinion. “And in that case, even if the competitive injury that results from selling the accused device is substantial, the harm that flows from the alleged infringement .?.?. is not.”

The appeals court in July issued a stay on the injunction, which allowed sales to continue while arguments were heard.

The appellate panel noted that even though Apple had claimed Samsung infringed on patents related to the Siri voice assistant, the Nexus phones lacked a similar feature.

“Galaxy Nexus does not have a feature equivalent to Siri,” the appeals court said, while noting that Apple argues “that the functionality of Siri depends in part on unified search,” which relates to its patent.

The opinion said Judge Koh “erred” in interpreting the law and that Apple failed to show “that consumers buy the Galaxy Nexus because it is equipped with the apparatus claimed in the 604 patent - not because it can search in general, and not even because it has unified search.”

Separately, Samsung unveiled Thursday the smaller and cheaper version of the Galaxy S3 smartphone in Germany.

The Galaxy S3 mini features a screen smaller than the Galaxy S3’s 4.8-inch display but the same size as Apple’s iPhone 5, its first resizing of its smartphone lineup. The first models of the iPhone had 3.5-inch screens.

“The Galaxy S3 introduced a new concept of smartphone that has proven hugely popular around the world,” said J.K. Shin, president and head of the IT & Mobile Communications Division at Samsung Electronics. “We’re now delighted to bring its revolutionary design, intuitive usability and intelligence to the Galaxy S3 mini in a more compact form.”

Samsung said the Android-powered mini will be launched in Europe later this month but kept mum on schedules for other countries. Europeans tend to prefer Galaxy phones to Apple’s iPhone, which is why Samsung unveiled the latest device on the continent.